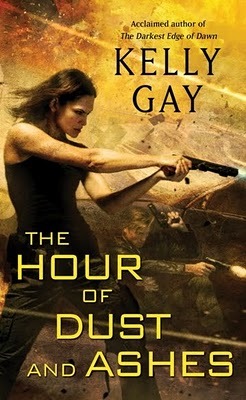 To save her sister, she must stop a silent killer. . .

Protecting Atlanta from the off-world criminals of Underground is tough enough, but now Detective Charlie Madigan and her siren partner, Hank, learn that the addicts of the offworld drug ash have begun taking their own lives. Ash makes humans the perfect vessels for possession, and something or someone is leading them to their deaths. Charlie is desperate to save her addicted sister, Bryn, from a similar fate. As New Year’s Eve approaches and time runs out, Charlie makes a deadly bargain with an ancient race of beings and embarks on a dangerous journey into hellish Charbydon with Hank and the Revenant Rex to save Bryn and make it back before it’s too late. Only, for one of them, coming home means facing a fate worse then death. . .

I read the first two books in this series a few years ago while on vacation. I read them both back to back and really enjoyed them. I came home from vacation to new releases from other authors and series that made me have shiny object syndrome. These books fell off my radar. I have no idea why, because I really enjoyed them. I was going through my TBR list on Goodreads to find books to take with me on my vacation this year and I saw these. I requested both books three and four from the library to take with me. I’m really glad that I did. I had forgotten how much I loved this series.

Charlie Madigan lives in Atlanta, but not the same Atlanta we know today. There are now off-worlders who exists from alternate dimensions. There are many different creatures that we know from mythologies from these dimensions. From the heaven-like dimension of Elysia there are sirens and angel-like, Adoni. From the hell-like Charbydon dimension, there are hellhounds, jinns and goblins, just to name a few. Charlie is a single, divorced mother and a member of the police force (though by this book she isn’t part of the regular Atlanta PD anymore). Her partner is a male siren named Hank.

In this book, some humans that are addicted an off-world drug which makes them very susceptible to possession. They are also committing suicide. On top of this, Charlie’s sister is one of the people addicted to this drug. Charlie, Hank and Rex, a Revenant, all venture to the hell-like dimension of Charbydon to prevent any more deaths, including Charlie’s sister and one of her daughter’s best friends.

There is a little bit of romance in this story, but no sex. There has been somewhat of a relationship building between Charlie and Hank. It takes an even bigger leap in this book. And I completely approve of this relationship development. I love Hank. He is so good for Charlie and her daughter. There is no awkwardness when they work together as partners. You can really tell that they are both willing to lay their lives on the line for each other, but have tons of fun together too.

While this series is on the darker side, there is still humor mixed in to lighten things up at time. Not only is Hank funny, but the Revenant Rex is really funny and provides a lot of comic relief. This is great urban fantasy series that brings all the aspects I expect to see in a series that I love. The heroine is strong and independent, but can take help from her friends when it is needed. I don’t require romance in my urban fantasies, but I don’t mind if it is there. This one is slowly building, which has been great to follow. I do love that even though this series is dark, there is humor mixed in with it. Like most urban fantasies, I would recommend that you start this series from the beginning.

“For the record,” he said, looking up at me with a crooked smile, “this is not how I pictured removing your pants for the first time.”
“That confidant, are we?”
His smiled filled out, deep and brimming with humor. “When something is this inevitable. Yes.”

He tossed my wet pants into the pile with the rest of my soiled clothes, then turned back and froze.
“You’re wearing SpongeBob underwear.”
Shit.
My gaze flew downward and my mortification was finally complete. “Emma got them for me…for my birthday.” What the hell. I might as well get it over with. “Patrick is on my ass.”

13 responses to “Review: The Hour of Dust and Ashes by Kelly Gay”