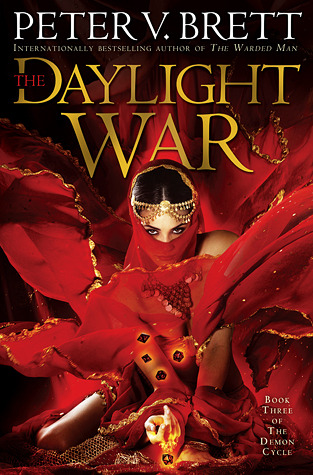 On the night of the new moon, the demons rise in force, seeking the deaths of two men both of whom have the potential to become the fabled Deliverer, the man prophesied to reunite the scattered remnants of humanity in a final push to destroy the demon corelings once and for all.

Arlen Bales was once an ordinary man, but now he has become something more—the Warded Man, tattooed with eldritch wards so powerful they make him a match for any demon. Arlen denies he is the Deliverer at every turn, but the more he tries to be one with the common folk, the more fervently they believe. Many would follow him, but Arlen’s path threatens to lead him to a dark place he alone can travel to, and from which there may be no returning.

The only one with hope of keeping Arlen in the world of men, or joining him in his descent into the world of demons, is Renna Tanner, a fierce young woman in danger of losing herself to the power of demon magic.

Ahmann Jardir has forged the warlike desert tribes of Krasia into a demon-killing army and proclaimed himself Shar’Dama Ka, the Deliverer. He carries ancient weapons--a spear and a crown--that give credence to his claim, and already vast swaths of the green lands bow to his control.

But Jardir did not come to power on his own. His rise was engineered by his First Wife, Inevera, a cunning and powerful priestess whose formidable demon bone magic gives her the ability to glimpse the future. Inevera’s motives and past are shrouded in mystery, and even Jardir does not entirely trust her.

Once Arlen and Jardir were as close as brothers. Now they are the bitterest of rivals. As humanity’s enemies rise, the only two men capable of defeating them are divided against each other by the most deadly demons of all--those lurking in the human heart.

***Spoilers from the previous books***
Despite liking THE DAYLIGHT WAY, generally speaking, I can’t deny my overall impression that the series has been poorly planned.

The first book was excellent, the second book spent an entire third of its content giving background on a new POV, and this third book reiterated half of that information, giving us New POV’s wife’s perspective on a lot of the same background.

It would have been much more efficient to introduce Jardir, Inevera, and Abban as new POVs at the same time in the second installment, rather than rehashing old news in the third with the addition of Inevera as a main character, but . . . poorly planned.

Not only that, but the new understanding gained from being privy to Inevera’s inner thoughts downgraded her from a scheming, manipulative female you loved to hate to a misunderstood woman who’s just doing the best she can to support her husband whom she dearly loves.

Don’t get me wrong, I’m all for sympathetic villains—it always makes you feel more when you understand a character’s motivations, but this went far beyond that (to the point that she doesn’t feel villainous anymore. At all).

On a totally random note, I can’t decide which is worse: being driven crazy b/c the character name “Leesha Paper” reminded me of something I couldn’t put my finger on, or finally figuring it out and having “Puff the Magic Dragon” stuck in my head. <——Boooooo.

ALSO, I’m annoyed that Brett never got to whatever the point is concerning Leesha’s constant headaches. I refuse to believe she’s tormented by them b/c the author suffers from migraines himself and is projecting, so what’s the deal? Can she learn to do some kind of creepy mind magic like the demon princelings and the headaches are a symptom? Does she have a brain tumor and she’s going to die? View Spoiler »Is she pregnant with some kind of half demon thing b/c Jardir is all warded up and no longer fully human? « Hide Spoiler

I don’t know. BUT. If you’re going to make such a huge friggin’ deal about something, at least get to the point. It’s not like you didn’t have sufficient time (nearly 700 pages worth) to do it.

I’m still not satisfied with state of Arlen and Renna’s relationship either. I mentioned in my review of The Desert Spear that the whole situation felt like a bait and swap. I’d hoped that this book would give more insight into their newfound dedication to each other, but aside from a few situations in which they clearly got each other, there was nothing to significantly diminish the earlier situations where Leesha and Arlen also clearly got each other.

There are people who believe that men marry the first compatible woman they date after they’ve decided they’re ready to get married—that it has nothing to do with finding “the one.” It’s just a right place/right time kind of thing.

That’s what this feels like, and whether or not there may be some truth in the real life sentiment, in a book, without further explanation, it’s lazy.

THE DAYLIGHT WAR was a definite improvement from the previous book, and THE WARDED MAN was a solid enough foundation to keep me interested in this series. Only one more installment before I’m current, so you’ll be hearing more from me soon. Hopefully it’ll be worth it. In the meantime . . . Recommended.

6 responses to “Review: The Daylight War by Peter V. Brett”