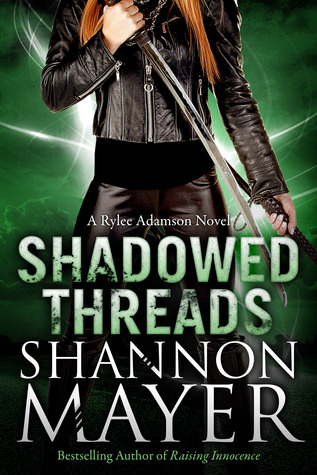 O’Shea is AWOL, and Tracking him is proving to be harder than I expected.

Not to mention the small fact that I have the Beast of Bodmin Moor chasing me across Europe, in a race against the odds, and my life as the prize.

But those things are minor compared to the secrets that finally come to light.

Secrets I wish had stayed hidden in the darkness . . . .

Book 4, and still, my indecisiveness about this series marches on. Shannon Mayer filled in a few more of the holes that have been bogging down the RYLEE ADAMSON universe, so at long last there’s only one elephant left in the room: O’Shea. It was great to see some of the secondary characters finally starting to stand on their own two feet; however SHADOWED THREADS continued to blur the line between magical boundaries, and convenient exceptions.

Despite what the blurb says, Liam has rejoined the Scooby Gang, and by doing so the author also revealed some of her plans vis-à-vis her leading man. I have to be honest, with Rylee being the only Tracker left after Jack, the addition of Blaz—yet another invaluable secondary—and now O’Shea with his wildcard; I’m beginning to feel like this whole world is filled with special snowflakes which in turn ends up demoting all of them to average Joes.

As gung-ho as Mayer has been with her secondaries, she’s also demonstrated that she can cull without mercy. A couple of characters have already bitten it, either permanently, or by way of unforgivable actions. Regardless of the means, the latest victim was a bit of a stumper, and completely changed the direction of the main story arc. Again. All of my predictions about this series are now out the window, so I NEED to read at least one more installment.

Rylee is becoming quite the popular girl; every supe has a use for her, and it has become difficult to separate the good guys from the bad. The vampires seem to be running things at the moment, but the dragons, and witches are closing the gap, and I’m quite positive that additional factions will throw their hats in the ring soon. That being said, this novel was more about who wants Adamson, and why instead of the protagonist’s victories.

RYLEE ADAMSON is back on the upswing thanks to TANGLED THREADS.