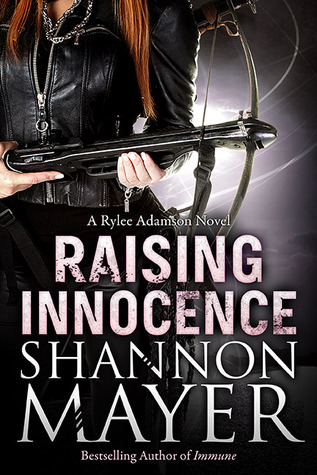 My name is Rylee, and I am a Tracker.

The FBI wants me on their team. Bad enough that they are dangling bait they KNOW I can't resist.

The catch? It's on the other side of the ocean.

And if I want what they're offering, I have to help them with a salvage gone terribly, terribly wrong.

But this time, I have no back up. I have no Plan B.

And I have no O'Shea.

I’m still trying to make up my mind about this series; the heroine’s competent, and I seem to be inhaling Shannon Mayer’s world-building like a bag of my favourite potato chips. But, then there’s O’Shea, I feel as though the author may have pushed his character well past his limits, and Rylee attracts sidekicks like a bad rash. The positives are definitely up there on my list of Urban Fantasy must-haves; however the negatives aren’t exactly easy to overlook. After 3 books I’m torn. I really am.

Adamson meets another Tracker in RAISING INNOCENCE, and he gives her the 4-1-1 on their particular flavour of magic; it was nice to finally have some of my suspicions confirmed, and learn about what other tricks the protagonist might pull out of her bag in future installments. Giselle also managed to stay lucid long enough to dish out some valuable info, so I’m feeling pretty good about the direction of the main plot arc, and about RYLEE ADAMSON in general.

No one really wants to read about a lead’s mundane day-to-day activities, and as a result I’m perfectly content when a writer opts to skim over their heroine’s job, or whatnot, but sometimes a little bit extra can go a long way. I love that Rylee’s strenuous training sessions are described in full, and that the story unfolds in real time. Mayer also provided a couple of much needed explanations mechanics-wise such as why RA’s Immunity doesn’t affect Alex’s collar. It was bugging me—thank you!

On to the not so rosy elements. I’m having difficulty recognizing O’Shea from one volume to the next; it’s hard to become invested in such an unstable character. I feel like he’s more trouble than he’s worth, and that it might be best to just take him out of the picture entirely. Then there’s Alex, Eve, Giselle, Dox, Pamela… when will the cast growth stop? I’d like to actually get to know some of the secondaries, and be able to identify them by their personalities instead of simply by name.

RAISING INNOCENCE clarified some things while muddying the waters on others. I will be continuing the series, but for how much longer is still up in the air.