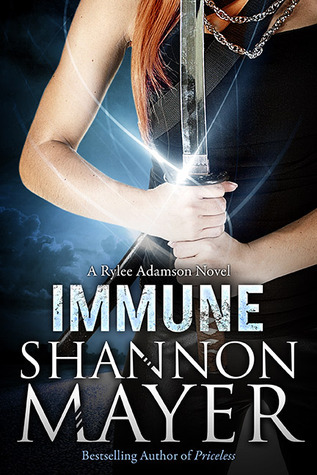 Underestimating demons is a bad idea, and it's a mistake that may cost not only my life, but the life of a missing child.

If I can swallow my pride, and allow Agent O'Shea to help me find a way to deal with the demon, we might be able to save the child.

With this salvage, it's a race against time, a test of trust, and a temptation that I'm doing my
damndest to ignore.

If only swallowing my pride and ignoring temptation was that easy.

IMMUNE was, well, a bit of a mess. After a respectable series debut, Shannon Mayer trades in her Urban Fantasy hat for a Paranormal Romance one which resulted in a pretty drastic u-turn that I didn’t particularly care for. Rylee/O’Shea’s relationship skipped every step in-between “hi, how are ya” and “I love you”, and you don’t get much more instant than that. But, then Liam isn’t in book 3 AT ALL if the blurb is to be believed, not to mention that the author is also going in questionable directions with a few of her characters. I just don’t know.

Adamson’s snarky tough girl attitude has started to surface which was exactly what I was hoping for. It’s too bad that it didn’t carry over to her dialogue with O’Shea; whether I continue this series or not will most likely come down to if Mayer decides to focus primarily on Rylee’s angsty romance with the FBI Agent, or on her cutthroat Tracker side. I’m all for option 2 in case I haven’t made that clear yet. Adamson was also very reckless in this novel which put my ‘established heroine’ remark from my PRICELESS review into doubt.

I hate Milly, I really do. Every protagonist needs a BFF / sidekick / ally, so I don’t get why the author destroyed their friendship in the first installment, and then continued to kick it while it was down in this one. It’s going to take A LOT for me to care about the witch. Why make that much work for yourself? Unless she’s disposable… I wasn’t ecstatic about what happened to O’Shea towards the end of this story either. It was yet another extreme approach to something that should have developed over multiple books, or not at all for that matter.

The best parts of this novel were the interactions between O’Shea & Alex; they are fighting for dominance within Rylee’s ‘pack’—one is human, and doesn’t have two clues about the on-going power struggle, and the other is a submissive werewolf who doesn’t have an Alpha bone in his body. It made for some entertaining mix-ups! The Kindle edition came with a cool character reference feature that was useful in identifying who’s who, and the plot itself was ok too with its triple threat. It’s unfortunate that it was overshadowed by main couple drama, and unstable secondaries.

IMMUNE was a far cry from book 1. It all comes down to RAISING INNOCENCE.