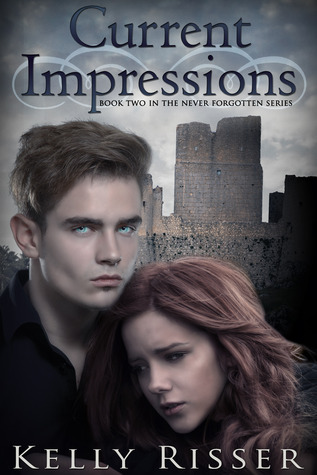 After an emotionally draining year, Meara Quinn is not the same carefree and innocent girl. Her mom is gone. Graduation is over. Taking a leap of faith and temporarily separating from her one love—Evan—Meara joins her father's world on a journey to learn more about who she is.

Too bad life is not all starfish and seashells. Meara gains magical abilities, but she’s forced to undergo intense training so she knows what to do with them. Her father chooses her aunt and Kieran as her trainers. And Kieran—a powerful male who's not from their clan—has the unnerving ability to infuriate and intrigue Meara at the same time.

While Meara begins her new life, Evan endures with her memory and the knowledge that he will see her in July when his internship begins. Although excited about gaining real world experience, it’s the thought of seeing Meara that really drives him. Unfortunately, Evan finds it hard to focus on anything when he’s suffering from vivid nightmares and screaming headaches.

When Meara and Evan reunite, everything seems to fall back into place. The summer appears to be perfect. Then two of her father’s guards are found dead, and foul play is suspected. The façade melts away. Someone is targeting them, and Meara must discover who it is and why. She turns to Evan to help her, but when he gives her the hot and cold treatment, she's left feeling alone and confused.

As the puzzle pieces move into place, will Meara be able to solve the mystery in time to save her clan and her relationship?


Almost a year ago I read and reviewed the first in this series titled, Never Forgotten. I really liked it and looked forward to reading the sequel. Didn’t think about it again, but happened upon the sequel recently, and snapped it up.Third and last book is already published as well, for those of you that don’t like waiting for sequels.

Meara has moved from Nova Scotia to her father’s home in Scotland. Home is a huge fortress on a island that has been spelled so human’s can’t see or find it. Meara’s father and his clan are, of course, not human. They are Selkies, commonly known as shape shifter seals. This world is all new to Meara as she was raised as a human, and is just now learning about her family and heritage. Meara’s boyfriend Evan, is also in Scotland, as he joined a research summer internship program so he could be near her. Back for this story as well, is Kieran, the beautiful Californian Selkie that tried to cause problems with Meara’s relationship with Evan in the first book. Now we find out that he will be the leader of his clan someday, he is looking for a strong mate-and he is looking right at Meara. Meara is the daughter of the Scottish clan leader, David, so she is strong with an incredible array of magical powers-think Bewitched, without the nose twitching.

The story is told from both Meara and Evan’s point of view. In the beginning, I found Meara’s story much more compelling, but as the story progressed, Evan’s story became almost as interesting. I also began to care more about Kieran’s part of the story, even though I really didn’t like him in the first book. David, Meara’s father, doesn’t have as big a role this time around and actually stays gone a lot. And that’s because war seems to be imminent. Selkie guards are being killed, both in Scotland and at other clan’s homes. Problem? They aren’t sure which of their many undersea enemies are at fault.

I enjoyed the the author’s world building and there is actually a lot of it to enjoy. All the enemies and their descriptions, all of the different Selkie powers(although only the strong manifest them) and lots of other little but intricately woven facets and customs of Selkie life make for a fascinating world.

Now, I know that the first book was supposed to be young adult, and it really started out that way. However, by the end, due to Evan’s and Meara’s physical relationship, although not explicit, I thought it should be for older young adults-probably 16 plus. This book definitely is for older teens to adult readers as well.

Biggest problems I had with the book? The dreaded cliffhanger. And this one was so abrupt that I was shocked. Not a fan. Then there is the pesky problem of a love triangle. Not always a fan, but I also know they are a staple of most young adult books. Having said all that though, I do plan on reading the last book, Always Remembered, because I am invested enough to want to see where the story is going. For the most part, I did enjoy the read, and I am glad I continued with the series.

FYI As of this writing, the first book, Never Forgotten is free on Amazon and Nook.