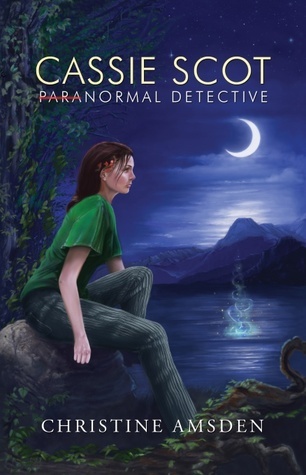 Cassie Scot is the ungifted daughter of powerful sorcerers, born between worlds but belonging to neither. At 21, all she wants is to find a place for herself, but earning a living as a private investigator in the shadow of her family's reputation isn't easy. When she is pulled into a paranormal investigation, and tempted by a powerful and handsome sorcerer, she will have to decide where she truly belongs.

I put this book on my wishlist months ago after seeing several back-to-back positive reviews of it by trusted bloggers.

If the book doesn’t go on sale immediately after it’s caught your eye, by the time it does, the stellar endorsements have become vague remembrances, and all the reasons you originally tossed it on top of Mt. TBR become overwhelmed with past experiences—BAD experiences—you’ve had with this type of (practically indie) book.

I’m really glad I decided to give it a shot anyway.

Cassandra Morgan Ursula Margaret Scot is the eldest of seven children. Her parents are powerful sorcerers, living in a magical hot spot, and while her brothers and sisters all have various and sundry magical gifts, Cassie . . . is a dud.

In the beginning, it was hard to have much sympathy for her predicament—her casual references to her parents extreme wealth firmly typecast her as a poor, little rich girl, and that scenario has rarely pulled on my heartstrings—but as the story progressed, and Cassie gained depth . . . I reluctantly decided to give her the benefit of the doubt.

And despite the somewhat rocky start, the further I read, quitting became less and less of an option, and by the time I was 86% in, I took a quick break to one-click the rest of the books in the series.

I, admittedly, began reading this book with extreme reservations, and I won’t lie . . . whether due to my own cynicism, or to legitimate reasons, for the first 20-25%, those reservations seemed justified: a Bad Boy from Cassie’s past breezed back into town, causing her to question her long term relationship with Nice Guy, who exists only in theory until his first on-page appearance nearly halfway through the book . . . and that’s it, really. Well, that and Cassie as poor, little rich girl.

But after Cassie had a “hunch” to check out the last known location of her prime suspect in the murder she was investigating for Bad Boy (<-----MAJOR peeve of mine to refer to common sense as a "hunch"), I checked out the relatively low page count, and decided to push through for just a bit longer . . . and that's when things finally started to get interesting. SO. Are we clear on the rough start? I don't want anyone running out to buy this book, reading the first few chapters and thinking, "Ye GODS, what is this?” then boycotting all of my recommendations for eternity.

Back to the interesting, unfortunately, there’s not much I can say about it without spoilers, but Cassie makes some decisions that prove she’s a worthy heroine, and the concept of magically incurred debt, which is similar (but different) to the Fae system was unusual and impressive.

There were also lots of hints of secrets to be revealed in future books, and most of those hints did their intended job of peaking my interest (as the aforementioned one-click binge can attest), but I was a bit disappointed that the most obvious of the secrets had not been addressed by the end of this installment . . . A magical dud named Cassandra who is consistently shown to be intuitive . . . ? Come now . . . you’re not fooling anybody. Why drag it out?

But overall, a surprisingly good start to a promising series. Highly recommended, especially to readers who like their Urban Fantasy with a side of Mystery.