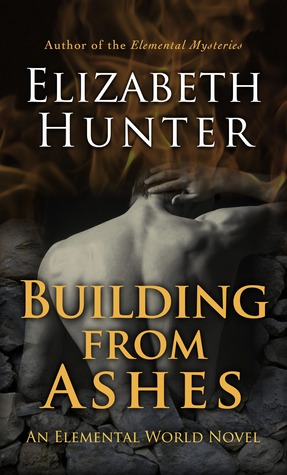 For a thousand years, powerful earth vampire Carwyn ap Bryn has served others. God. His family. His friends. But tragedy and loss disrupt his peaceful existence, causing him to question everything he has committed his eternity to.

Brigid Connor has known about vampires since they rescued her from a painful childhood. But not even their vast elemental power can save her from the demons that torment her.

As loyalties are tested and new paths are forged, a lurking danger slowly grows in the Elemental World. Carwyn and Brigid will learn that even secrets revealed can come back to haunt you when you least expect it.

A continuation/spinoff of the Elemental Mysteries series. The timeline in this books stretches from BEFORE A Hidden Fire starts (so you see a little character history) until AFTER A Fall of Water finishes. As I’m sure lots of you could tell, Carwyn had quite a few things going on in his life that didn’t make it into Gio and Beatrice’s story. So Building From Ashes explores that storyline and also sets up the Elemental World for some new adventures...

The Elemental World is a PNR spin-off series from Hunter’s Elemetnal Mysteries series, and as excited about this book as I was—FINALLY, a HEA for Carwyn—while still being a good read, it didn’t quite live up to my expectations.

Carwyn is a nearly 1000 year old Welsh vampire, and he’s been a priest that entire time. When he dedicated his life to the church, priests were allowed wives, and Carwyn had one, but when she died, leaving him a single parent of several small children, he was understandably distraught. His father, also a man of the church, sent him traveling on an errand to distract him from his melancholy.

It’s on that errand that Carwyn was changed into a vampire.

Despite his dedication to the church, Carwyn isn’t the stodgy, over-serious type you might expect him to be, not at ALL. He’s actually a bit of a prankster who LOVES pro wrestling, and has an extensive collection of truly horrible Hawaiian shirts. He’s also a huge flirt.

But he’s never felt compelled to move beyond flirtation.

Well, he’s never felt compelled to move beyond flirtation until one of his daughters turns a beloved member of their human contingent into a vampire.

Brigid Conner has not had an easy life. As a child, she was adopted into Carwyn’s extended family after being rescued from her pedophile stepfather. Overcoming something like that is never a simple or easy task, and Brigid has struggled both with developing healthy relationships, and with . . . drugs.

Throughout her life, Carwyn has always been a constant. Her rescuer when she was a child, the one who discovered her addiction as a young adult, various times in between as well . . .

I liked the main plot of this book very much. What I struggled with was the timeline.

In Elemental Mysteries, the first couple of books (book 1 especially) took place years before the present. It wasn’t my favorite part of the series, and while it didn’t particularly bother me, I was glad when we finally got, and stayed, current.

This time it felt like a reread of previous events from another POV. I’ve never been a fan of that, and it was perhaps even more off-putting, having just finished reading said previous events.

Another issue I had was the religious overtone Carwyn’s man of the cloth status brought to the situation. Carwyn obviously struggled with his commitment to the church in conflict with his attraction to Brigid, while Brigid, as good Catholic, vowed over and over that she was going to hell for being attracted to a priest, and those are the kinds of things I avoid in fiction.

It’s just not my thing.

But the religious aspect is an isolated situation, so I have no qualms about continuing to read the series.

AND it must be said that a slightly disappointing Hunter book is still leaps and bounds better than most others, and the issues I had were not big enough to keep me from enjoying Building From Ashes overall. Recommended.

13 responses to “Review: Building From Ashes by Elizabeth Hunter”