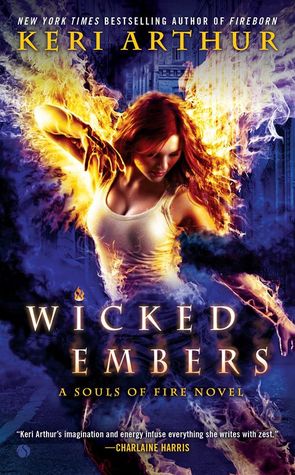 Keri Arthur, New York Times bestselling author of Fireborn, presents the thrilling new Souls of Fire Novel featuring Emberly Pearson, a phoenix that can transform into a human—and is haunted by the ability to foresee death....

Crimson Death, the plague like virus spawned from a failed government experiment to isolate the enzymes that make vampires immortal, continues to spread. Emberly and her partner, Jackson Miller, are desperately seeking the stolen research for a cure before the virus becomes a pandemic.

But their mission is jeopardized by another threat uncovered in Emberly’s prophetic dreams. A creature of ash and shadow has been unleashed on a murdering spree. Now Emberly must summon all her gifts and investigative knowledge to put an end to this entity’s brutal rampage—even if it means placing herself in harm’s way....

Keri Arthur used to be one of my MUST read authors; her RILEY JENSON GUARDIAN novels are still, to this day, some of my all time favourite werewolf books. Then, I gave her DARK ANGELS a whirl, and my zeal for her writing took a bit of a dive. Being the ever dedicated fan-girl that I am, I snatched-up FIREBORN and enjoyed it. WICKED EMBERS on the other hand was freakishly similar to Arthur’s other two series, so newcomers will probably enjoy it, while as seasoned stalkers like myself might conclude that it’s just more of the same.

The story was good—prophetic dreams about a beast on a killing rampage, and the red cloak plot line thickens. I was hoping for more phoenix mythology, but that particular aspect was (unfortunately) a little on the light side in this installment. The action was plentiful, and surpassed my Urban Fantasy standards; then again, I’d expect no less from this writer because that’s her #1 strength when it comes to this genre, well that and thread weaving.

Emberly is clearly a hybrid of Riley/Risa. Her abilities are different; however as I mentioned, the author didn’t really go into them that much, so the variations were negligible which made all of the other similarities extremely noticeable. Sam could be the meat in a Quinn/Azriel sandwich, and Rory is a close proximity of Rhoan/Tao, except she doesn’t have sex with either of the latter which brings me to my next point…

I accepted Riley’s promiscuity because she’s a werewolf, and they tend to get around. And, maybe that’s unfair of me, but all three of Arthur’s heroines have been easy lays, and don’t know the meaning of the word monogamy. It’s difficult to cheer for a protagonist who thinks with her woman bits first and her brain a distant second. That being said, I’m deeply tempted to pick-up the next title based solely on the last sentence.

There was nothing significantly wrong with WICKED EMBERS; I’ve just read this book three times now.