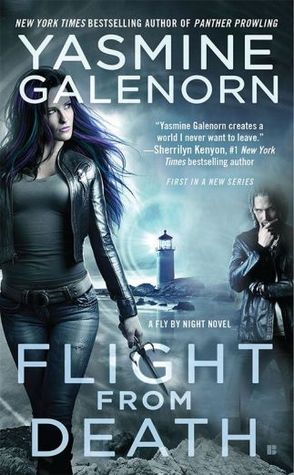 I’m Shimmer, a blue dragon shifter. Thanks to a mistake, I was exiled from the Dragon Reaches and sentenced to work for Alex Radcliffe, a vampire who owns the Fly by Night Magical Investigations Agency. Now, not only do I have to adapt to Earthside culture, but every time I turn around, somebody’s trying to kill us. And worse, Alex is as gorgeous as he is exasperating. But you know what they say: All’s fair in love and bounty hunting…

When an old friend of Alex contacts him about a haunting at the High Tide Bed & Breakfast in Port Townsend, Washington, we think we’re on a simple ghost hunt. But our investigation quickly transforms into a deadly fight as we uncover an eighty-year-old murder, a cursed house, and a dark force trapping the spirits within. To stop impending disaster we must break the curse and lay the angry spirits to rest.

Shimmer is a blue dragon that receives her energy from the ocean, or any other deep water. She’s spent her long life living in the dragon realm, but after getting into some major trouble, she is banished to earth for five years.To make matters worse, a lot of her powers have been stripped from her, and now she can only transform when she is in deep water. She also has to work at a private eye firm in Seattle, owned and run by Alex, a vampire. And that’s the thing that really isn’t a hardship as she has a crush on him. She’s been earthbound for a few months when Alex is asked to investigate an old friends bed and breakfast that he has just renovated. There a haunting going on and it’s up to Alex, Shimmer, and another member of the team, Ralph(a werewolf computer nerd), to figure out what’s going on-and rid the house of the problem.

Shimmer was an interesting character, as was Alex.Because the author starts the book with them already knowing and working with each other, we don’t get the initial meeting or feelings about the other, and I missed that. It did jump start the romance in that you can’t really call it insta-love, and that part did work for me. The author also introduced Tonya, a psychic that lives in the small town where this takes place. She almost felt like a main character by the time this was over, but since she doesn’t live close to Seattle where the rest live, I guess that’s not going to happen. That’s a shame because I thought she added a lot to the story. Another character, Chai, is a djinn(genie) and also had a big part. The author definitely fleshed him out as well as he was pretty fascinating, and I look forward to seeing more of him in future books.

If you like a good ghost story, well this is definitely one. But the author takes it a step further and adds in evil beings of a sort that were totally new to me. Then she one ups that and brings in another sort as well, and ties both types of evil beings to the forests of the Pacific North West. After reading this, not sure if I want to visit a forest anytime soon. The world building was pretty unique with both the beings in the forest, and about the dragon realm as well. While none of the story takes place in the dragon realm, there is a good bit that is told about it from Shimmer’s perspective about how hard life is in the dragon realm for a dragon with no parents and no name.

I wasn’t familiar with this author, so this is the first by her I have read. I know she wrote the Otherworld Series, and this one is a spin off. There were a few times that the reader knows that what is being mentioned must have happened in a previous book, but it didn’t bother my read in any way. It actually made me a bit curious about the previous series.

One thing I really didn’t like is just a personal preference. The author utilizes the vampire not seeing their reflection. To me that’s just a Hollywood thing and it bothers me when that’s used. Not a major issue though.

All in all, a good ghost/evil beings story with strong likable characters, and I mostly enjoyed the read. I received a copy of this from Net Galley in exchange for a fair and honest review.

28 responses to “Review: Flight From Death by Yasmine Galenorn”