Today we are celebrating the release of BIRTHRIGHT, the fourth full-length novel in the award-winning Ivy Granger urban fantasy series by E.J. Stevens.  We have a special book excerpt, commenter prizes, and a HUGE swag giveaway.  So grab a cupcake and some punch.  It’s time to party!

Wisps buzzed through the air, their musical humming rising in pitch as they darted in for a closer look. I sat on the mossy embankment and smiled, watching the playful wisps.
With my father’s key helping to guide us, we’d left the deadly bog and its poisonous gas behind. I breathed deeply, and let out a happy sigh.
“I don’t know what you’re so happy about,” Torn said, shaking water from his hair. “We’re covered in mud and smell like troll farts.”
It was true. The sulfurous swamp gasses did smell an awful lot like something that would come out of Marvin after he ate an entire cauldron of Kaye’s chili, but I didn’t care. We were alive. And so far, my wisp brethren weren’t trying to kill me.
I’m not sure what it said about my life that the lack of fratricide upon my homecoming made me feel all warm and fuzzy inside. Probably best not to think too much about it, and just enjoy the moment.
I shrugged, and kept on smiling.
“Well don’t get too comfortable, Fish Breath is on his way over with his pensive face,” Torn said.
He stalked off to sit on a rock a few paces away, but I shrugged again and closed my eyes, turning my face to the moon and stars above us. I wasn’t going to let Torn ruin this moment.
“Are you feeling well?” Ceff asked, settling on the mossy ground beside me.
I cracked an eye open, grinning from ear to ear.
“I feel great, never better,” I said. In fact, I felt a bit dizzy and my lips tingled, like I’d had too much to drink. Only I would get buzzed off the buzzing of wisps. “Just buzzed off the buzzing.”
I hiccupped, and giggled, the laugh coming out in an undignified snort that startled the nearest wisps.
“Are you sure that you are not angry, or afraid?” he asked.
I forced myself to look up into Ceff’s face. His head was titled to the side, as if listening for something, but his attention was focused solely on me.
“I’m fiiine, really,” I said, waving a hand. My eyes widened, and I let out another giggle. “I’m glowing.”
“Which is probably what has his highness’ panties in a bunch,” Torn said, coming over to tower above me, arms crossed. “There is something weird about seeing you smile like that, especially when you’re glowing.”
“What?” I asked. “I smile.”
“Almost never, and when you do, it’s usually because you’re killing something,” he said. “Not that I’m judging. I’m just saying Fish Breath has a point. You’re different.”
“She is high on power,” Ceff said, eyes going tight. “I should have recognized the signs sooner, but I was focused on our flight through the bog, and then with releasing the water magic that held our masks together.”
“You think it’s the wisps?” Torn asked.
“That would be my guess,” Ceff said, rubbing his jaw.
“This didn’t happen after our run in with those wisps in Ocean Overlook cemetery, did it?” Torn asked.
“No,” Ceff said. “Not that we noticed. But Ivy was badly wounded that night, and took days to recover consciousness. And…I…I was not at my most attentive.”
That was the night that I’d killed his ex-wife. Melusine may have been the raging psychotic bitch who’d murdered his children, and tried to kill us as well, but that didn’t mean her death had been easy on Ceff.
The memory of Ceff’s grief flooded me, pushing the giddiness away.
“I think…I think I’m back to normal now,” I said. I yawned, covering my mouth with the back of my gloved hand. Ignoring the encroaching bone deep fatigue, I tried to pull myself to my feet, but sank back down when a wave of dizziness nearly toppled me over. “I just need a minute.”
“You are exhausted,” Ceff said, brow wrinkling. “Rest here. I will keep first watch.”
“But my father’s court…” I said, but my words were cut short by another yawn.
“Will still be there tomorrow,” Torn said.
“Plus, I can scout ahead while you sleep,” Ceff said. “We will make better progress if we are rested and certain of the path ahead.”
“Fine,” I said, eyes fluttering closed. “But just a quick nap.”
The last thing I saw, before losing myself to the darkness of sleep, was a cloud of wisps hovering over me, lending me their warmth…and their power. 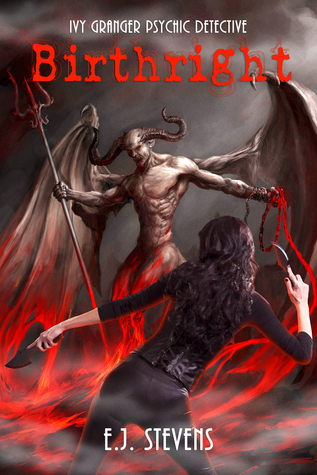 Ivy must go to Faerie, but the gateway to the Wisp Court is through Tech Duinn, the house of Donn--Celtic god of the dead. Just her luck.

Unable to share her secret with Jinx, and with Jenna called away on Hunters' Guild business, Ivy must rely on Ceff and Torn to lead her to Death's door, literally, and back again. As if that wasn't dangerous enough, there's no saying what horrors lay in store within the Faerie realm. Too bad the Wisp Court is the one lead Ivy has in the search for her father--and possible salvation.

Maybe hiding away and dodging sidhe assassins isn't so bad after all...


Humphrey the Gargoyle? Sparky the child demon lord? Marvin the troll teenager? Kitchen brownies, Hob and Skillywedden? All these, and lots more make up Ivy Granger’s friends in this series that takes place in Harborsmouth, home of many different sorts of supernatural creatures. Some of these are peripheral characters, but the author has realized them so well, that you wait to see them from one book to the next. My new favorite is Sparky-of course. He’s up to mischief at every turn, and Ivy and her sidekick, Jinx, spoil him like you would any child. What if he is supposed to turn into a scary demon when he is older, it doesn’t matter to Ivy and Jinx. He was one of the funnest part of this read for me. Just a heads up, there will be a few spoilers coming if you haven’t read the previous books.

As I have said in previous reviews, Ivy and all the supernaturals make these stories for me. In addition, the premise’s never disappoint. This time, it mostly revolves around Ivy, and her newly dead status. At least that’s what the Fae assassin’s think. They don’t know that Ivy was able to get around that little problem, and now has to play dead until she can find a way to glamour herself in front of humans. Until she does, when she gets upset or hurt, she lights up and glows, and the Fae powers that be are not happy about it. Ivy is a princess of the Wisp realm, and her hunt is on for her lost father, King Will o’ the Wisp. She feels that only he can teach her what she needs to know about her fellow wisps and how to glamour herself. So Ivy, her fiance, Ceff(King of the Kelpie’s), and Torn, the lord of the cat sidhes, set out on a journey to find Ivy’s father and birthright. This takes them to the land of Fairy.

To keep the spoilers to a minimum, I will just say that the land of Fairy is definitely nothing like I always assumed a Fairyland to be. There’s danger at every turn, and possible death at any given moment. Things that happened in this realm were certainly surprises for me and nothing I could have anticipated. What should have taken just a short time, took much much longer. Of course fae time and human time are different in this author’s excellent world building. This author certainly knows how to keep the reader on her/his toes!

These books are always well written, the characters(as I said before)well realized, and the premise of each, exciting-usually with lots of action. This keeps the pace moving perfectly. Ivy has more than her share of snark, bravery, and is loyal to her friends to the max. Her romance with Ceff is sweet, with a side of mild heat. All of this has made this series a must read for me. I can’t wait to read the next one, titled, Hound’s Bite. Highly recommended to adult urban fantasy/fantasy fans.

We are giving away a BIRTHRIGHT t-shirt, button, signed postcard, and mini poster to one lucky winner!

To enter, please use the Rafflecopter form below. This giveaway is INTERNATIONAL. Giveaway ends August 4, 2015.

Thank you all for partying with us!

In addition to the huge swag pack giveaway, we are also giving away Ivy Granger series stickers, buttons, and signed postcards. Each tweet, FB post, and blog comment using the hashtag #BirthrightParty will count as an entry. Winners will be randomly selected throughout the day. So party with us and spread the word all day July 14th for a second chance to win!

22 responses to “Review and Excerpt: Birthright by E.J. Stevens”