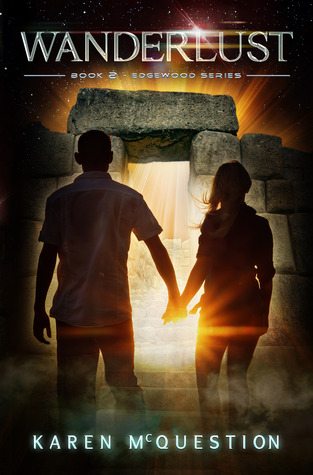 Mallory, Russ, Jameson, and Nadia are just trying to blend in as normal teens while secretly learning to use their newfound superpowers. Everything changes when they’re invited to travel to Peru under the supervision and protection of the Praetorian Guard, an organization claiming to have their best interests at heart. Seeing the trip as a challenge, the teens agree to go and help search for David Hofstetter, a man from their hometown who’s been presumed dead for sixteen years.

Meanwhile, the threat of the rival organization, the Associates, is always present. When knowing who to trust becomes more difficult, the four discover they can only count on each other. And when Nadia and Russ are thrown together in a fight for their lives, they realize their relationship might be headed for more than just friendship.

The second in this trilogy, Wanderlust is the continuing story of four teenagers that share a secret after witnessing an otherworldly? event. Of course it is young adult, but even at my older age, I found it to be an engrossing read.

The last book, Edgewood, featured Russ as the main character, with Mallory, Nadia, and Jamison as other secondary characters. This time around the story is told from both Russ and Nadia’s point of view, in the first person. That worked well for me, especially getting to see into more than one of the characters minds. Nadia has had a crush on Russ since she met him. Russ however had fallen under Mallory’s pretty, and popular girl spell in the first book, even if she was wishy washy towards him. But don’t think for one moment that this is a teen romance or a love triangle of any sort-well maybe a tiny bit-but nothing major. That’s because the crux of this story is the teens special powers they have developed, and the organization known as the Associates, that are trying to recruit them using nefarious means. It also features another organization, the Praetorian Guard, that is working against the Associates, while still trying to work with the teens.

The main setting of this book moved from Edgewood to Peru. Under the guise of an academic school trip to Miami, the four teens travel with three of the former teenagers that witnessed the same event many years previously. The three are members of the Guard, headed up by Mr. Specter, Russ’s science teacher. Once in Peru, things start happening pretty quickly-and not good things.

This read continues the story with lot of action, a mystery solved, betrayals, and even some life or death moments for the teens. I continued to really love the character of Russ and added Nadia to that list as well. Nadia really has had the worse circumstances in her life. Russ and Nadia together was a really sweet part of the book. It was about time that Nadia had some good in her life.

I enjoyed the Peruvian setting, the romance, the mystery, and the fact that it didn’t end up being one of those books that take place in jungles. Not a fan of those. Above all else, I enjoyed reading about the powers the teens have and how they use them. With the exception of Jamison-he’s the epitome of a high school jerk-a very smart one, but still a jerk.

These are perfect young adult books for those teenagers that enjoy science fiction, suspense, and of course a first love story. My only problem with these is the same thing I said about the first book, we still don’t get the answers I, and I am sure lots of readers want. I also wonder why the characters don’t question it as much as the reader does. However, I still recommend them to both young adults and adults because there really is a lot to like about these reads.