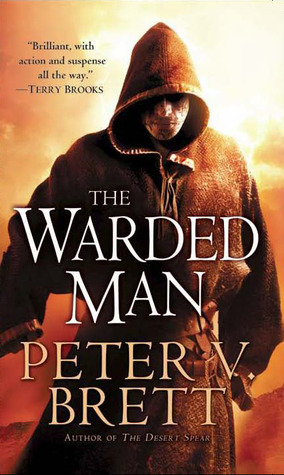 As darkness falls after sunset, the corelings rise—demons who possess supernatural powers and burn with a consuming hatred of humanity. For hundreds of years the demons have terrorized the night, slowly culling the human herd that shelters behind magical wards—symbols of power whose origins are lost in myth and whose protection is terrifyingly fragile. It was not always this way. Once, men and women battled the corelings on equal terms, but those days are gone. Night by night the demons grow stronger, while human numbers dwindle under their relentless assault. Now, with hope for the future fading, three young survivors of vicious demon attacks will dare the impossible, stepping beyond the crumbling safety of the wards to risk everything in a desperate quest to regain the secrets of the past. Together, they will stand against the night.

One of my favorite things about reading fantasy is the brand new worlds.

Writing a good book is an accomplishment by itself, but in fantasy . . . the writer not only has to come up with a good story and good characters, they have to create a new place with new rules, new creatures, new cultures, new everything.

For an escapist reader, like myself, shoddy world-building can ruin an otherwise perfectly good book, but above and beyond fantastical, yet believable new worlds, I crave novelty.

Maybe I haven’t encountered the type of world in THE WARDED MAN, b/c I tend to stick to a certain type of fantasy (sword and sorcery, epic, and/or high fantasy), but whatever the case, the blend of the standard pre-industrial age + magic fantasy world and real world demonology . . . was utterly captivating.

Nearly four hundred years ago, demons rose for the first time in three thousand years. The world population was decimated.

Science and technology had made belief in anything not immediately tangible practically obsolete, and if the scientists had not dug out texts cataloging things considered to be make-believe, humanity might have disappeared entirely.

I already love advanced civilizations that have been tossed back into the dark ages b/c HUBRIS, but when the root cause is something supernatural vs. some type of modern self-destruction, so much the better.

SO. Various elemental-type demons: fire, water, rock, wood, wind, etc. rise from the earth every evening as the sun sets, wreaking havoc until sunrise. Houses have stone foundations and tiled roofs covered in glyphs. Wards surround all buildings like a circle of protection, but like any circle of protection, it must be perfectly maintained—any flaw can render the protection useless, and that means a painful death at the claws (and sharp, pointy teeth) of a demon.

And as is often the case, this world is on the edge of a precipice. Things have to change and change drastically if humanity is to avoid extinction, which brings me to our three main characters: Arlen, Leesha, and Rojer. Each has an important role to play, each discovers knowledge vital to the struggle against demons, and their individual journeys toward their inevitable meeting are as fantastic as the world in which they live.

I loved the world, the story, and the characters, but what pushes THE WARDED MAN into the top tier of books I’ve read is the pertinence.

I can point to really good, really interesting books all day long. But it’s when the author manages to unobtrusively weave a message with real world implications that pushes it over the edge to GREAT, and Brett does exactly that . . .

In a book with demons as the major antagonist, it would be easy to get preachy.

It doesn’t. Not even a little bit.

Instead you’re presented with people and circumstances that encapsulate the hypocrisies of organized religion: rumormongering, pots and kettles, complacency, etc. The MCs confront this kind of small-mindedness while readying the masses for the looming confrontation. Sometimes gently, sometimes not-so-gently, and it’s a breath of fresh air. Even if you weren’t raised with religion and its subculture shoved down your throat, many of the principles explored are applicable, and, again, unobtrusively approached.

The people of this world are in a steady population decline b/c they’ve been cowering behind wards, waiting for the “Deliverer” to appear and save them . . . Arlen, Leesha, and Rojer will teach them to get off their butts and save themselves.

Believe me when I say it’s worth the read. Highly recommended.