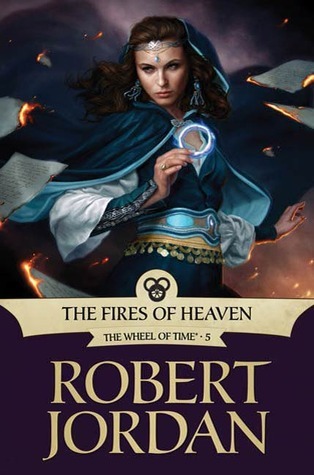 The bonds and wards that hold the Great Lord of the Dark are slowly failing, but still his fragile prison holds. The Forsaken, immortal servants of the shadow, weave their snares and tighten their grip upon the realms of men, sure in the knowledge that their master will soon break free...

Rand al' Thor, the Dragon Reborn, knows that he must strike at the Enemy, but his forces are divided by treachery and by ambition. Even the Aes Sedai, ancient guardians of the Light, are riven by civil war. Betrayed by his allies, pursued by his enemies and beset by the madness that comes to the male wielders of the One Power, Rand rides out to meet the foe.

SO. Most of my favorite things in this series are in play now. I’m particularly fond of the time spent in Ebou Dar and a couple of other things that are still in development, but, yeah, we are well on our way.

For some reason I’m have no a hard time coming up with plot points that don’t give too much away, so let’s talk about some of the characters.

Mat Cauthon is my FAVORITE.

If you’re familiar with the WoT at all, you know that Mat is a . . . gambler, a prankster, a rascal, in another life (HA!) he would make an excellent pirate.

In this life . . . Well, let’s just say he still needs to reconcile himself to a few things.

Life is complicated for Mat, you see, and he’s not all that happy about it (b/c Two Rivers STUBBORNNESS), b/c really, when he forgets to be indignant, he quite enjoys the things that he excels at.

And that’s a lot fun.

Both the clever ingenuity and the resulting indignation when older, more seasoned men with lots of responsibility (<------the real problem) start "weighing him" with their eyes. Mat doesn't want to impress important men. They might start expecting things from him.

He wants his concerns to be limited to things like, “Never gamble without knowing a back way out” and “Never kiss a girl whose brothers have knife scars.” <------LOL. And that's the least of it. The BEST examples are too spoilery for everyday use. Then there's Nynaeve. A lot of people don't know this, but Emma Woodhouse (the heroine of Jane Austen's Emma) is meant to be a difficult-to-like character.

She meddles and manipulates, she thinks she knows better than 99.9% of the population, she’s selfish and entitled, and the list goes on.

BUT. She also means well.

It may be slow-goins’, but there is character development going on with the similarly difficult Nynaeve.

She’s actually one of the most complex characters IMO. Or maybe that’s just narcissism. *snickers* I know firsthand how hard life lessons can be for strong-willed individuals, so I like Nynaeve as much as I like Emma, which is to say, a LOT.

I also think Jordan uses her to poke fun at male-female stereotypes. Some people might find it to be less than PC, but to throw around another cliche, something about nails and hammers . . . Just sayin’.

The Aiel are firmly in play, and they’re my favorite people group.

Also, there’s and explosion of Forsaken. Previously, there have been one, maybe two in play at a time, and I say “in play” loosely, b/c except for Lanfear, they’re mostly absent until it time to kill a Bad Guy.

However, in this installment, we’re suddenly dealing with like five of them. Maybe six. And anything that gives us more information about the Age of Legends is aces in my book.

I’ve avoided saying much about it b/c I can’t even mention my second favorite character yet View Spoiler »BIRGITTE!! « Hide Spoiler, but Valan himself is a safe topic, and he is hilarious. He’s good-looking, with a “well-turned calf,” and he constantly flourishes the red cloak he habitually wears.

Alone, he’d probably be insufferable, but Valan + his interactions with Nynaeve . . . good times.

So yeah, I like this series. You should read it.

7 responses to “Review: The Fires of Heaven by Robert Jordan”