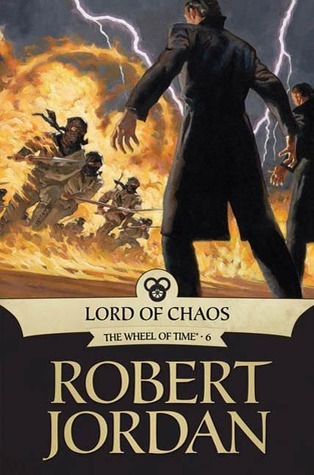 In this sequel to the phenomenal New York Times bestseller The Fires of Heaven, we plunge again into Robert Jordan's extraordinarily rich, totally unforgettable world:

On the slopes of Shayol Ghul, the Myrddraal swords are forged, and the sky is not the sky of this world ...

In Salidar the White Tower in exile prepares an embassy to Caemlyn, where Rand Al'Thor, the Dragon Reborn, holds the throne -- and where an unexpected visitor may change the world ...

In Emond's Field, Perrin Goldeneyes, Lord of the Two Rivers, feels the pull of ta'veren to ta'veren and prepares to march ...

Morgase of Caemlyn finds a most unexpected, and quite unwelcome, ally ...

There’s the Morgase situation, which is one unfortunate event after another.

We’ve watched the Pattern rearrange itself for Rand, Mat, and Perrin. To their benefit. This almost seems like the opposite. And FYI, if you don’t already know, I have NOT read WoT #14 yet (that’s the purpose behind this reread), so if there is a reason, and you know it, you had better keep it to yourself. *brandishes fists*

Misinformation, coincidence, pessimism, logic, you name it, and somehow it’s a contributing factor to the mess that is Morgase-on-the-run.

Also, you can’t throw a rock without hitting a Forsaken. This is the installment where you learn what “Bal’azamon” meant when he went on and on about having power over the dead.

I’m torn between just accepting how realistically petty and squabbling these Big Bads are amongst themselves, and being . . . disgusted. You want reasons for why these powerful weilders-of-the-One-Power joined the Dark Side? Nine times out of ten it boils down to jealousy. If not jealousy, then resentment over some perceived slight. The notable exception is a Mad Scientist-type who was forbidden from continuing his bizarre genetic engineering experiments, but even that could be attributed back to resentment (for not adequately appreciating his “genius”).

So yeah, there’s a surplus of scheming and machinations happening.

And that is not limited to the Forsaken, no, it is NOT. The Aes Sedai on both sides are behaving abominably.

Salidar Aes Sedai: the “Little Tower” decides the best way to legitimize their claim is raise their own Amyrlin. And that’s a good idea. It makes sense. BUT. Even with the Tower broken and Tarmon Gai’don on the horizon, they can’t lay their own goals and ambitions down long enough to come to an agreement, so what do they do?

View Spoiler »Twist Tower law into raising an Accepted that ALL factions believe they can manipulate to their own ends. « Hide Spoiler

Tower Aes Sedai: a delegation of Sisters—including Reds—arrives in Cairhien under the guise of honoring the Dragon Reborn and negotiating some kind of mutually beneficial “arrangement” that ultimately hinges on Rand’s agreement to go (and presumably stay) in Tar Valon. BUT. The second they arrive they begin preparations for his refusal, in which case the new plan is to View Spoiler »transfer delegation leadership to a Red (whose sole purpose is to find men who can channel and destroy that ability), forcibly abduct Rand, beat him into submission on the way to Aes Sedai HQ, and bring someone he cares about along as well, for motivation purposes. « Hide Spoiler

And while we’re on the subject of Aes Sedai, poor judgement, and superiority complexes, let’s talk about their hierarchy.

What’s it based on?

NOPE. It’s based on STRENGTH in the Power. As in the arbitrary amount of the True Source a woman can safely handle.

Sorilea would have been put out of the Tower without ever being tested for Accepted.

And Sorilea is by all accounts the most respected Wise One in the Aiel nation. SO. It’s no surprise that after their dealings with the Salidar Aes Sedai (who are by far the lesser of evils), any intimidation they originally felt has been replaced by scorn.

Just as concerning is the “Black Tower,” run by Mazrim Taim . . . All I’m going to say about him is that if you’re suspicious . . . you should go with that.

As disheartening as ALL of that sounds, it’s not all bad.

There’s Olver, the nine-year-old Cairhien orphan adopted by the Band. His story is heart-breaking, but he is resilient. And with an army of indulgent “uncles” he’s infinitely better off then he was among the refugees.

Sulin-in-livery is also pretty great. *snickers* As is Davram Bashere, and Loial’s reaction to learning that his mother has—as he’s always feared—come after him with a bride in tow.

So yeah, good stuff to help break-up all the awfulness, but overall, this is not a happy installment. Be prepared to watch Rand slip further and further behind his wall of stone.

How will the Wise Ones teach him to bend like a willow so he does not shatter? I do not know. But I’m going to find out.

10 responses to “Review: Lord of Chaos by Robert Jordan”