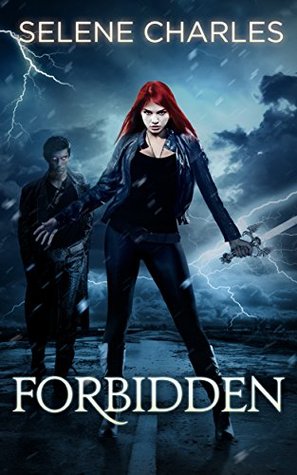 Flint DeLuca is sick and tired of moving. She and her dad have moved three times in the past year. But that's the life of a carnie. Even an ex-carnie like her. Her father swears this is the last move. All Flint wants now is to graduate from High School and put the carnival life behind her. Unfortunately, one of the two ain't gonna happen. So now not only is she back in the life she can never seem to get away from, she's also met this guy who pushes all her "I totally hate you" buttons.

Cain. No last name. Wears shades in school. Dresses entirely in black. And only speaks to her when he's insulting her. She hates him. Hates him. And yet... there's something about the Goth boy that draws her like a moth to flame. God, she can't wait to graduate and get away from Whispering Bluff, only problem is she's pretty sure her high school is infested by vampires. Cain might be one of them. And for some reason, she seems to be on their menu.

Carnival Diabolique? Oh yeah, count me in. It might be an older young adult read, but I ended up completely enjoying it as much as any good adult book. And it was good! One thing though, when reading this, you immediately think of Twilight. Lots of similarities. As in, I almost put it down after a few chapters-there’s only one Twilight as far as I am concerned. Don’t judge. But the writing drew me in, and the story pretty much did a complete 180, so trust me, the Twilightish parts almost completely go away.

Flint and her dad have recently moved to small town Tennessee. Her dad is what as known as a catcher in the high flying acts in the circus. Flint used to fly too, until her mom died while walking a tightrope the year before. Her dad gets a job at the circus, and it’s not like any circus they have ever worked at. It only operates late at night, and the workers are almost all really strange. Flint starts her senior year, and immediately meets Abel, a friendly outgoing guy that she instantly puts in her friend zone. Then she meets Cain, Abel’s brother, a muscled, super good looking guy, with his eyes hidden by sunglasses,that totally ignores her, at first. She definitely doesn’t put Cain in the friend zone. Turns out the guys live at the circus, and their father is the owner, and her dad’s boss. And nobody is what they seem.

The characters and supernatural beings were my favorite part of this read. Flint is a good person, athletic, pretty, and takes care of her dad. Cain is a brooder type, quiet, and has a temper. Although he’s not friendly in the beginning, the chemistry between Cain and Flint is off the charts most of the time. And of course there’s reasons for why he is the way he is. Abel is a sweetheart and was one of the best parts of the read for me. I enjoyed Flint’s friends from school (and also performers at the circus),Janet and Rhi. They were really different, as in scary different. There’s lots of other interesting secondary characters as well-as you would expect from a high school and circus as the main settings for this book.

As far as the main premise, which I am not going into, I thought it had a lot of unique elements-ones that I wasn’t familiar with. That’s saying a lot when you read as many paranormal books as I do. The writing was good, and actually this writer also writes as at least two other authors-RS Black and Marie Hall. In fact this book is a spin off of RS Blacks, Night Series, which I knew nothing about, but now think I might try it.

The pace was super fast, a one day read for me, and I have already read most of the second one. The reason for this for me was the cliffhanger ending as I had to see what happened next. Cliffhangers are something that I truly don’t enjoy. I was just glad the second one was already released although I have a feeling the second one might end that way too.