This June marks the release of The Night of the Highland Dragon, the third in Isabel Cooper’s fantastic paranormal Highland Dragon series. To celebrate the release, Isabel is giving us an exclusive peek into some of the MacAlasdair’s more interesting ancestors – some of them may even appear in future books of the series!

Arach Alastair, Laird Alastair, Alexander Draconis, Red Alex (100 BC-500 AD)
Among other things, a Roman centurion: his shapechanging ability as well as his skill at leading men gained him considerable praise, but he was always too blunt and independent-minded to really ever have Imperial favor. (His very abilities—and his apparent immortality—branded him as a threat to several highly-placed people, and only his inhuman nature saved him from at least one poisoning attempt.) When he returned to Scotland and acquired land there, it was to the considerable relief of his former countrymen, not to mention the delight of several local girls. One of his wives was purely human; others, less so. History is more or less silent on the subject of the women he didn’t marry, but his bloodline will occasionally speak for itself.

From the soot-stained sides of the alley, shadows emerged and became men. Judith counted five: big fellows, all of them, and at least two openly carried long knives. She let out all her breath, hissing it through her teeth, and took a step back.

“It’s all right,” William said, putting a hand on her arm. Oh, good: he was going to try and be protective. This day was going wonderfully. He turned to the men. “Very sorry to disturb you. We’ll just be on our way.”

Protective and diplomatic. Even better.

Even from a distance, he reeked of drink. His eyes were glassy, and he grinned when he spoke in a way that Judith didn’t like at all. Neither did she like the way the others were looking at him, taking their cues. On their own, sober, any of them might have been reasonable. Right now she could feel the avalanche building.

Judith took more quick inventory. The men would probably catch up quickly if they tried to run. The alley was dark, and the leader was probably right: she’d never known most people in cities to intervene, and the local constabulary didn’t take much interest in a neighborhood like this one. She wasn’t armed. She didn’t know if William had brought whatever weapon he’d been reaching for out at Finlay’s, or how skilled he was with it if he had. And she was wearing skirts.

She sighed, held still, and decided to try a little diplomacy of her own. “I’m sure we can settle this peaceably. Just leave us enough money for tickets home, aye? We’ll hand over the rest.”

The leader shook his head. “Won’t need money when we’re done with you. Won’t need to go home, either,” he said. Judith didn’t recognize what cue he gave, and he didn’t speak, but she heard footsteps behind her.

She whirled, caught the man’s outstretched hand as he tried to grab her arm—they always tried for the bicep if you were a woman, devil only knew why—and used his body as a pivot for her own. Her elbow smashed into his jaw with all her weight behind it. His head snapped sideways with a cracking sound: his jaw, not his neck, for he yelled in agony and staggered back, clutching the side of his face.

There was no time to see William’s reaction.

“Are we finished—” she started to ask.

Then the leader roared and rushed forward, and the rest followed his lead. It was an answer, just not the one Judith had wanted. “I did my best,” she muttered, not sure if she was speaking to William or the robbers or her own conscience. Then she gave herself over to the moment.

During the day, Isabel Cooper maintains her guise as a mild-mannered project manager in legal publishing. In her spare time, she enjoys video games, ballroom dancing, various geeky hobbies, and figuring out what wine goes best with leftover egg rolls. Cooper lives with two thriving houseplants in Boston, Massachusetts. 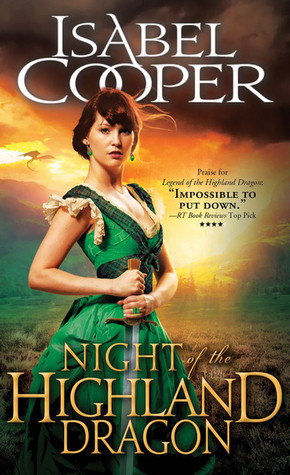 "They say," said the girl, "that people disappear up there. And I heard that the lady doesna' ever grow any older."
"The lady?" William asked.
"Lady MacAlasdair. She lives in the castle, and she's been there years, but she stays young and beautiful forever."

In the Scottish Highlands, legend is as powerful as the sword-and nowhere is that more true than in the remote village of Loch Aranoch. Its mysterious ruler, Judith MacAlasdair, is fiercely protective of her land-and her secrets. If anyone were to find out what she really was, she and her entire clan would be hunted down as monsters.

William Arundell is on the trail of a killer. Special agent for an arcane branch of the English government, his latest assignment has led him to a remote Highland castle and the undeniably magnetic lady who rules there. Yet as lies begin to unravel and a dark threat gathers, William finds himself drawn deeper and deeper into the mystery of the Highlands...and the woman he can neither trust nor deny.

He prays she isn't the murderer; he never dreamed she was a dragon.

Third and final book in this series, Night of the Highland Dragon brings Judith, sister to Stephen and Colin into the story-finally. She had been mentioned several times throughout the last two books, so I was more than ready to see what was in store for her in this read. And of course to see her get her HEA.

Judith is the oldest of these dragon siblings, and at this time she is the lady of the manor-or in this case castle in Scotland. Finally one of these books takes place in Scotland! She only stays at the castle for a couple of decades, or so at a time, doesn’t age, and so she has to leave. Then a faked death, and sometime in the future her ‘granddaughter’ will return. If she looks exactly like her grandmother, well, only the elderly will notice-nothing a little magic spell can’t take care of. And there’s plenty of magic in the small village of Loch Arach-too much so at this time. Bodies of both animals and a young man are found-at a time and place where livestock is the very livelihood of the villagers so something needs to be done. William comes to Loch Arach to investigate. As an agent for a secret branch of the British government, William goes undercover wherever magic is being abused. Judith is his number one suspect, and not because he knows she is a dragon(he doesn’t), but because there have been rumors about her family and magic for years, and it has never been checked out until now.

Whereas the second book was a bit slow, this book pulls the reader into the story and keeps them interested throughout, at least I thought so. William finds himself slowly drawn to the lady of the manor, Judith. For her part, she is drawn to him as well, but she is all about keeping the secrets of her and her siblings lives, and protecting the people of her village. She doesn’t trust him, just as much as he doesn’t trust her.

It was fun to see the two, both with the same objective-find the one responsible for the deaths-slowly start to trust each other. The characters were fairly interesting, I just wish there had been more chemistry between the two prior to the first love scene. I think it would have been more believable, but maybe since the year is 1895 or so, that’s just how some people were back then. However, I thought the chemistry between Colin and Reggie in the second book was immense compared to this. Judith is a bit more straitlaced as lady of the manor, than Reggie was, as daughter of the manor.

As in the first two books, I ended up wishing for more from the dragon. Of course there is some, and even a dragon/demon fight, I just wanted a bit more. However, this book was full of action, some violence, and spooky (at times) magic. I would consider it a paranormal romance/mystery, although I knew who the bad guy was early on, but that didn’t ruin the read for me at all. The whole last half of the book had me reading non-stop, and when I finished, I literally said out loud, I enjoyed that!

Recommended for adult paranormal romance readers-ones that don’t mind a historical time period. Actually, I thought the time period was perfect for all three of these books. I received a copy of this book in exchange for a fair and honest review.

20 responses to “Review and Spotlight: Night of the Highland Dragon by Isabel Cooper”