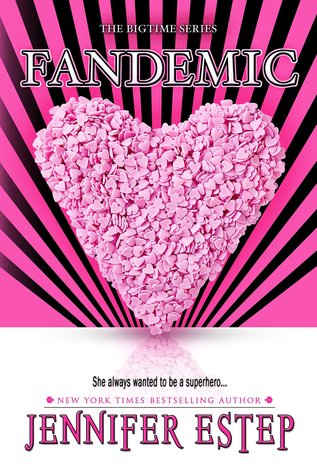 Piper Perez has always wanted to be a superhero. Always wanted to wear a cool costume, have amazing abilities, and save the day. There’s just one problem—Piper doesn’t have any superpowers.

So she focuses on other things. Facts, figures, memorabilia. Piper knows and collects it all, about both the superheroes and the ubervillains who roam the streets of Bigtime, N.Y. Piper’s friends jokingly call her a fandemic—someone who is a superfan of all things superhero. The nickname is truer than anyone knows, especially since Piper can’t stop thinking about Swifte, the speedy hero who broke her heart months ago.

But someone has been killing off Bigtime’s heroes and villains. When one of Piper’s friends is murdered, she vows to do whatever she can to help bring the killer to justice, superpowers or not. All the clues and information she gathers lead her to believe that Swifte is the killer’s next target. Piper has always wanted to be a hero, and now she’ll have to use all of her fandemic knowledge to save the man she loves—or die trying….

Note: Fandemic is around 43,000 words. It is Book 5 in the Bigtime superhero series.

Happily-ever-afters for everyone! This series may be about superheroes and ubervillains, but in Jennifer Estep’s BIGTIME universe even the little guy is deserving of finding love. In this installment its Piper and Swifte’s turn, and I think that pretty much everyone will get a kick out of this one because as a fellow reader you’ve either A) attended a book con, and can relate to Perez’s FANDEMIC condition, or B) have been waiting nearly three years for more BT.

This novel may have been shorter than some of the previous titles, but it was absolutely overflowing with little extras tailored specifically for Estep addicts. There’s shout outs to all three of her other series, an abundance of never-before-seen superheroes, more of Rascal—the puppy from #4—and an impressive Big Bad. The story starts off in a sex club, and ends in wedding bells; so needless to say, it’s far reaching for 43,000 words.

These books are as loud as their covers, and the author did a fantastic job of making Piper a larger-than-life character by transforming her crazed fandom into its own strength. As a result, the end battle was probably the one that I’ve had the most fun with to date. Swifte’s a decent guy, and even though he’s very flamboyant about his superhero status, I liked that their relationship and personalities were the focus instead of superpowers.

Piper & Swifte have a past which was a change from the prior couples; it gave the story more of a second chance at love slant which I enjoy whether it’s with someone new, or rekindling an old flame. I was happy that the two protagonists didn’t have the insecurities that some of the earlier characters in this series did, and although Swifte’s reason for breaking it off was kinda weak; it’s BIGTIME, and that means it’s supposed to be silly, so he gets a pass.

Was this review helpful? If so, please like it on GoodReads!