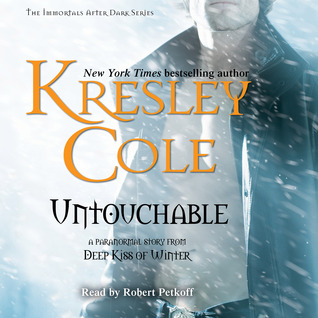 In this paranormal story from the Deep Kiss of Winter anthology, #1 New York Times best-selling author Kresley Cole delivers a breathtaking tale about a brutal vampire soldier who experiences love for the first time...and a Valkyrie aching to be touched.

Murdoch Wroth will stop at nothing to claim Daniela the Ice Maiden -- the delicate Valkyrie who makes his heart beat for the first time in three hundred years. Yet the exquisite Danii is part ice fey, and her freezing skin can't be touched by anyone but her own kind without inflicting pain beyond measure. Soon desperate for closeness, in an agony of frustration, Murdoch and Danii will do anything to have each other. Together, can they find the key that will finally allow them to slake the overwhelming desire burning between them?

UNTOUCHABLE piggybacked off of many of the previous installments in this series which gave it a “been there, done that” quality. Murdoch & Daniela’s relationship was somewhat similar to Naomi & Conrad’s from book 5 in that physical contact was impossible, and both stories featured a Wroth brother. The plot was shaky, and seemed more intent on recapping past IMMORTALS AFTER DARK happenings while also introducing new characters instead of giving the two leads their due. This was the third novel that’s missed the boat which is still a respectable track record.

The romance was this audiobook’s biggest failing in my opinion; I liked that the roles were reversed with the female pursuing the male, but the two protagonists were constantly at each other’s throats (again, similar to KISS OF A DEMON KING) which turned their love story into a war zone. The author glossed over the many steps between Bachelor Panic to HEA, and as a result I just didn’t get how they got from A to the cheeZiest ending that this series has produced so far. The sex scenes made me laugh with their artificial melodramatics and cloyingly sweet feels.

I’ve already expressed in some of my earlier reviews how much I enjoy the fact that many of the installments take place alongside one another; however this novel blurred the timeline a bit with too much jumping around. We go from the beginning of this series, to the Hie, to the conclusion of Conrad’s tale, and then wrap it all up with Danii’s plot thread. I felt like a deranged bouncy ball landing briefly in all eight of the preceding titles while barely touching upon more on target specifics such as ice fey mythology, and Forebearer deets.

Robert Petkoff’s narration rode in on its white horse for the third time to rescue Kresley Cole’s flailing writing; I’m beginning to suspect that his delivery has more to do with IAD’s success than the author. Ok, no, not really, but the last few audiobooks have definitely benefited because of his contribution. He tried Loa’s Cajun accent on for size, and it suited him just as well as the werewolves’ Scottish brogue, or the rage demons’ fury.

UNTOUCHABLE was mostly a flop, although the Petkoff band-aid made it worthwhile.