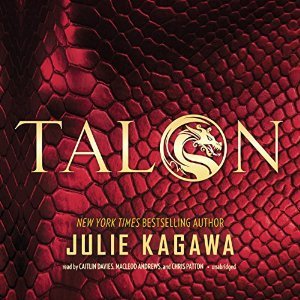 Long ago, dragons were hunted to near extinction by the Order of St. George, a legendary society of dragon slayers. Hiding in human form and growing their numbers in secret, the dragons of Talon have become strong and cunning, and they're positioned to take over the world with humans none the wiser.

Ember and Dante Hill are the only sister and brother known to dragonkind. Trained to infiltrate society, Ember wants to live the teen experience and enjoy a summer of freedom before taking her destined place in Talon. But destiny is a matter of perspective, and a rogue dragon will soon challenge everything Ember has been taught. As Ember struggles to accept her future, she and her brother are hunted by the Order of St. George.

Soldier Garret Xavier Sebastian has a mission to seek and destroy all dragons, and Talon's newest recruits in particular. But he cannot kill unless he is certain he has found his prey—and nothing is certain about Ember Hill. Faced with Ember's bravery, confidence and all-too-human desires, Garret begins to question everything that the Order has ingrained in him—and what he might be willing to give up to find the truth about dragons.

Going in, I knew that this audiobook was probably going to be a letdown given how the reviews were stacking up, but I got it as a daily deal, so no big. The blurb is misleading with its “groundbreaking modern fantasy series” because Sophie Jordan wrote a very similar story back in 2010 with FIRELIGHT. Those points aside, Julie Kagawa has been on my radar for a while, and I love dragons. Overall, I did enjoy TALON from a Contemporary Young Adult Romance standpoint even though it was super predictable, and not overly avant-garde.

The love triangle was a given; book 1 focused on the ‘forbidden boy’, and if the author stays true to the YA course, 2 will be about Ember’s dragon’s mate, and the conclusion will be her making the inevitable choice. Oh wait, there are five volumes planned, so expect a few filler installments in-between. Still, I liked Garret. My #1 gripe with this novel was the absence of dragons. TALON (the organization) is all about assimilation, and the author fixated on that; there were a total of four shapeshifts, and two of them happened in tandem at the end.

I enjoyed the alternating POVs because they allowed listeners to come to their own conclusions about each of the characters, and went a long way towards establishing their back stories. Ember’s on her way to being a hellraiser with her defiant nature, and relentless quest for the truth. The plot did have some noticeable holes in it though like for instance TALON’s pathetic attempts at hiding their sleepers. Dead parents, recent transplants, and draconic names were major red flags, and made it almost too easy for St. George to track them down.

The narration was this audio’s strongest suit with three seasoned performers; all were new to me, but that didn’t stop me from being dazzled by their deliveries. As the lead, Caitlin Davies captured the heroine’s teenaged voice to perfection; my only criticism of her was her pronunciation of ‘room.’ It was quite noticeable because the word appears repeatedly, and she didn’t enunciate the second O. MacLeod Andrews was a pivotal factor in me being pro-Garret early on, and Chris Patton’s role was minor, so I won’t weigh-in on his narration just yet.

TALON didn’t soar, but it didn’t crash & burn either—typical YA.