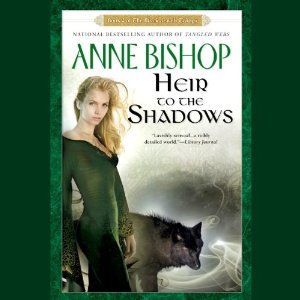 Enough time has passed for the young girl Jaenelle, heir to the magical Darkness, for her physical wounds to heal, while amnesia keeps her frightening memories at bay. But with Saetan--a Black-Jewelled Warlord Prince and Jaenelle's foster-father--to protect her, she will continue to grow. Her magic will mature. Her memories will return. And Jaenelle will face her destiny when she remembers Daemon, Saetan's son, who made the ultimate sacrifice for her love....

It took me a full year to build up the courage to listen to HEIR TO THE SHADOWS after being thoroughly traumatized by book 1. I really love Anne Bishop’s THE OTHERS series, and I’m a firm believer in second chances when it comes to authors, so after twelve months of mental preparation, here we go again. It’s with a massive sigh of relief that I write this review because A) no nightmares & B) this installment was a vast improvement upon the previous one. It was slow paced, and was more about the dialogue than the action, but we’re definitely getting somewhere.

This novel concentrated on Jaenelle’s road to recovery; after two years in a coma, she must battle her way back to sanity, and then take the necessary steps in order to become the Queen she was meant to be. The story followed Angelline from the age of twelve to twenty, so it’s best to minimize the number of sessions spent reading this book in order to avoid confusing the timeline. Lots of character development takes place, both where the protagonist was concerned as well as the secondaries, and all of the chess pieces were brought to the fore, including the kindred—wolves, unicorns & dragons!

Even though THE BLACK JEWELS series now has nine volumes under its wing, it was originally a trilogy, so this installment felt like it was the limbo between books 1 & 3 which explains its lack of major intrigue. By the end of this novel everything was in place for an earth-shaking payoff, except the love interest. Daemon Sadi was off in cuckoo land, but other than that I was able to better appreciate Bishop’s Dark Fantasy because this story was minus the truly heinous tidbits; however that doesn’t mean that the author dons kid gloves. Every character is still fair game.

John Sharian’s narration didn’t creep me out nearly as much as it did in DAUGHTER OF THE BLOOD. I still question the producer’s decision to go with a male voice for this series, but Angelline’s entourage is a sausage fest, so with the more disturbing aspects behind us, he’s growing on me. Sharian’s ominous tone actually worked to his advantage when he mimicked Jaenelle’s ‘midnight voice’, and I thought that he was reasonably adept at keeping the plethora of personas separate, although he does goof on occasion, and slips into his staple timbre when he shouldn’t.

HEIR TO THE SHADOWS was almost good. I’m eager for Anne Bishop to bring it home with QUEEN OF THE DARKNESS.

8 responses to “Audiobook Review: Heir to The Shadows by Anne Bishop”