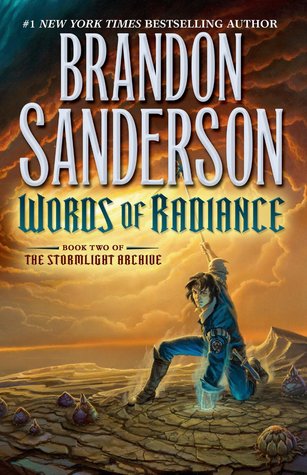 In the first volume, we were introduced to the remarkable world of Roshar, a world both alien and magical, where gigantic hurricane-like storms scour the surface every few days and life has adapted accordingly. Roshar is shared by humans and the enigmatic, humanoid Parshendi, with whom they are at war. Among those caught up in the conflict are Highprince Dalinar Kholin, who leads the human armies; his neice Jasnah, a renowned scholar; her student Shallan, a brilliant but troubled young woman; and Kaladin, a military slave who, by the book’s end, was beginning to become the first magically endowed Knight Radiant in centuries.

In Words of Radiance their intertwined stories will continue and, as Sanderson fans have come to expect, develop in unexpected, wonderfully surprising directions. The war with the Parshendi will move into a new, dangerous phase, as Dalinar leads the human armies deep into the heart of the Shattered Plains in a bold attempt to finally end it. Shallan will come along, hoping to find the legendary, perhaps mythical, city of Urithuru, which Jasnah believes holds a secret vital to mankind’s survival on Roshar. The Parshendi take a dangerous step to strengthen themselves for the human challenge, risking the return of the fearsome Voidbringers of old. To deal with it all, Kaladin must learn how to fulfill his new role, while mastering the powers of a Windrunner.

WORDS OF RADIANCE is the second installment of Brandon Sanderson’s STORMLIGHT ARCHIVE series, and, unfortunately . . . it fell a little flat for me.

Don’t get me wrong, I liked it. This was one of those occasions when my rating steadily declined the more I stewed about the ends and outs . . . but immediately upon completion, I was all, “Yeah! Sanderson rocks again. WOOT!

I had several significant issues with this book:

The Cosmere is the realm in which many of Sanderson’s different series take place. There are different worlds for the individual series, but these worlds are all in the same universe. I believe to the ultimate goal is to begin a new series (after the completion of its forerunners) that ties the worlds together in a less tangential way.

Anyway, there are Easter eggs aplenty for a savvy fanperson, and I was made aware that a couple of important characters from a different series played important roles in WoR.

So I read the book from which these characters came just prior to starting to WoR . . . and then I completely missed Crossover #1’s big entrance.

“How is that even possible?” you ask, and that’s an excellent question, b/c, yes, I had just finished Crossover’s book, and, yes, everything from it should have been fresh.

Sanderson decided to disguise Crossover. Changed his name and made him a “Master” of something he had previously only been good at. In fact, in Crossover’s book, he wins fights against more skilled foe by distracting them, b/c he knows he can’t win if he plays fair.

How are we supposed to recognize Crossover if he’s in disguise?

The obvious answer would be to make a point of gestures or catch phrases Crossover became known for, or references to key ideas from the world we last saw him in . . . and in a way Sanderson did this: he made up metaphors that referred to the most obvious aspect of the magic system in Crossover’s world.

BUT. There were no such metaphors used in actual book.

So despite the obvious nature of these “colloquialisms,” they flew right over my head, b/c they weren’t consistent to that world. Add to that the fundamental alteration of Crossover’s abilities, and I failed to see the point of having a crossover at all.

And that annoyed me. Greatly.

And Rule #1 was broken. If you don’t want to be spoiled, that’s all I can say about it. For the Sandersonites who demand to know my reasons for casting more aspersions on their beloved namesake: View Spoiler »I KNOW he wanted to make a point about the resilience of Surgebinders when he “killed” Jasnah, but he chose a crap way to do it. The fact that he had to explain his intent in numerous posts and even wrote a Jasnah POV detailing exactly what happened only makes my point for me.

I think the point was an important one.

I dislike the way he went about making it. The end. « Hide Spoiler

Furthermore, the focus of this book felt completely different than its predecessor.

In WoK, good triumphed over evil b/c valor and loyalty and determination to be better than the corrupt leadership. Slaves became bloody heroes, and I thought my heart would burst from the FEELS.

In WoR . . . Shallan refused to unstick her head from the sand, and no amount of witty banter could overshadow her chicken-ness. Kaladin was the aforementioned loser, whiny baby. Dalinar shifted his stance on something he had previously forbidden b/c it was a convenient way to get rid of the competition, and Adolin had a psychotic break.

Instead of steadfast perseverance resulting in victory, victory was obtained despite the lack of heroism, b/c last minute come-to-Jesus.

However . . . there were enough interesting plot developments and secondary characters to keep it from being truly awful. Lift was enough by herself to make reading WORDS OF RADIANCE a worthwhile endeavor, and in a series like this skipping installments isn’t an option. But ultimately . . . I’d say we have a classic case of Second Book Syndrome on our hands. Recommended with qualifications.

9 responses to “Review: Words of Radiance by Brandon Sanderson”