Posted May 3, 2015 by Melanie in Melanie, Paranormal Romance, Reviews / 13 Comments 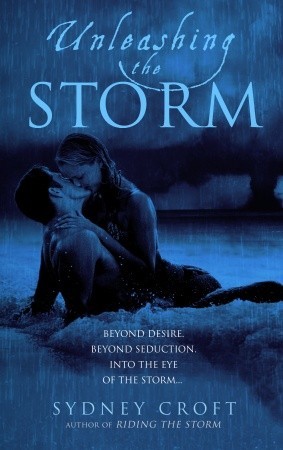 Feel the heat. Hear the roar.
The fever has begun...

There’s a storm rising. Electricity crackles in the air. For Kira Donovan, it’s that time of year again: when the need floods her flesh, when almost any man—the bigger and the stronger the better—will do. For Kira, an animal psychic, the heat is a matter of life and death, and this year it has come at just the right time. Tom Knight, a natural-born predator, has arrived at her isolated Idaho farm—for reasons all his own. . . .

At first Kira isn’t interested in Knight’s motives. She only needs him—his body, his hands, his scent. But soon, through a daze of desire and distrust, Kira discovers Knight’s world—the world of a covert operative, one man among dozens of secret agents waging an astonishing global war. Knight’s mission is to bring Kira—kicking and screaming if necessary—into the Agency for Covert Rare Operatives and harness her extraordinary gift. He never expected the powerful emotions she would ignite in him, or the fierce desire to keep her safe from harm. For as darkness gathers around them, Kira is feeling the heat once again, leading them both on a wild ride of delicious thrills ... and terror beyond imagining.

While I enjoyed the first book in this series, I really loved this visit back into the world of ACRO (Agency for Rare Covert Operatives). ACRO is an organization very similar to the X-Men. Somewhat military group where people have different special powers. There is even a group of bad supernaturals, ITOR, which ACRO are up against.

We meet our hero, Ender, in the first book. He is former military (like many of the ACRO agents). He also has abilities like a cheetah. He has great speed, among other things. He is also a bit of a loaner. Even his teammates give him a wide berth. He is very good at what he does, just don’t ask him to attend social functions. He is tasked with bringing in Kira willingly or no. If he isn’t able to bring her in, he has to put her down to keep her out of the enemy’s hands.

Kira is an animal whisperer. She has the ability to actually talk to the animals, some species more than others. The smarter the species, the better her ability to talk to them. This ability doesn’t come without complications. Kira comes into “heat” every spring. She not only has to have sex every four hours, she must have unprotected sex to get the man’s seed in her for these or she dies. She is immune to human diseases, but not animal ones (she had to go to a vet for Parvo once) and she is on the pill to prevent pregnancy. She is not a fan of the “heat” cycle. It is quite the hassle and really makes sex little more than a chore for her.

I really enjoyed this book. While this series has even more sex than most paranormal romance novels (I would call this paranormal erotica), it isn’t out of control. There is still character development and a plot. Even with a character that must have sex every four hours, there are several times where the author kept the plot going with “He serviced her” or “After her needs were met…” Don’t get me wrong, there are plenty of sex scenes, but there is also plot and when called for, the author put the plot ahead of the sex scenes, which I appreciate.

These two also didn’t have insta-love. It took a while for the relationship to build. They had to work through all their issues, on both sides, before they were able to come together. There are even times where they split because they think things just won’t work (nothing new in the romance world), where Kira spends a little time with our couple from book one, Riding the Storm.

There are also a few side plots going on in this story that were a continuation of Riding the Storm. We learn more about Creed and Annika. You can see them working through a lot of tough issues between them. It is hard because Creed is the only person Annika can have sex with without electrocuting to death, but there are commitment issues. Creed is looking for more that a general lay.

The other great side story is Devlin, the leader of this merry band of supernaturals. He is trying to figure out who the mole is, so he calls in an old friend and lover, Oz. He needs someone that he trusts implicitly to help him figure how these intimate details of the organization are getting out to the enemy.

This is a fun, action-packed story filled with some really fun supernaturals. I would love to have Kira’s powers to talk to animal (minus the requirement of sex every four hours or death part). I think it would be so cool to talk to animals all the time. The one issue I had with this was that she has a hard time talking to birds, but birds are some of the smartest species in the animal kingdom, so I don’t understand why she wouldn’t be able to talk to them.

While there is a lot of sex in this story, I didn’t feel as overwhelmed by it as I was in the first book. In Unleashing the Storm, I felt that the plot always continued to move forward, even with the sex. When the action needed more attention, the authors were great at mentioning that the Kira still had to have her sex, but it was just the mention and then back on to the plot. Then when it made sense to the flow of the story, there was a very well written sex scene without losing the flow of the story.

While this is the second book of the series, I think you could read this one without having read Riding the Storm first. The good guys and bad guys are very well explained. However, if you want to read the entire series, it might not be a bad idea to read in order, more for the side stories than the main story.

13 responses to “Review: Unleashing the Storm by Sydney Croft”