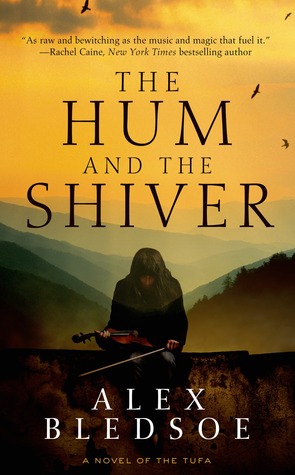 Named one of the Best Fiction Books of 2011 by Kirkus Reviews, The Hum and the Shiver by Alex Bledsoe is an enchanting tale of music and magic older than the hills. . . .

No one knows where the Tufa came from, or how they ended up in the Smoky Mountains of East Tennessee. Enigmatic and suspicious of outsiders, the Tufa live quiet lives in the hills and valleys of Cloud County. While their origins may be a mystery, there are hints of their true nature buried in the songs they have passed down for generations.

Bronwyn Hyatt, a pure-blood Tufa, has always insisting on doing things her own way, regardless of the consequences. Even though Tufa rarely leave Cloud County, she enlisted in the Army to escape the pressures of Tufa life—her family, her obligations as a First Daughter, and her dangerous ex-boyfriend. But after barely surviving a devastating ambush that killed most of her fellow soldiers, Private Hyatt returns to Cloud County wounded in body and in spirit. But danger lurks in the mountains and hollows of her childhood home. Cryptic omens warn of impending tragedy, and a restless “haint” lurks nearby, waiting to reveal Bronwyn’s darkest secrets. Worst of all, Bronwyn has lost touch with the music that was once a vital part of her identity.

Now Bronwyn finds the greatest battle to be right here at home, where her obligations struggle with her need for freedom, and if she makes the wrong choice, the consequences could be deadly for all the Tufa. . . .

“Imagine a book somewhere between American Gods and Faulkner. In brief: a good book. Absolutely worth your time.”—Patrick Rothfuss, New York Times bestselling author, on The Hum and the Shiver

The Tufa have been living in their valley in the Smokey Mountains of Tennessee for as long as anyone can remember.

Two years later she finds herself returning to the home she fled a war hero. A horribly wounded war hero with no recollection of her heroic deeds, but as far as her country and her government are concerned, a war hero nevertheless.

What follows is Bronwyn’s journey to find her place among her people.

I was captivated by that journey.

I was transported back to my childhood in rural Middle Tennessee, where I had known these people. Been friends with some of them, knew something was wrong with others, and was constantly surrounded by them b/c they were my family and my neighbors, my teachers and my schoolmates . . .

I would never go back to that world.

But the good was good enough to make it worth the visit.

THE HUM AND THE SHIVER encapsulates the rural South better than anything else I’ve read. Be warned: parts are hideous. This is not the genteel South. There are no beautiful, ramshackle old plantation homes. There are no eloquent and wise matriarchs sitting on their front porch, drinking lemonade and quilting. There are no Sunday afternoon picnics under centuries-old oak trees.

Stupidity isn’t contagious and some people have never fallen prey to ridiculous ideologies.

And ultimately it’s those people that this book is about. With a supernatural twist: where did these Tufa come from anyway?

Read it and find out. Highly recommended.

13 responses to “Review: The Hum and the Shiver by Alex Bledsoe (@jessicadhaluska, @AlexBledsoe)”