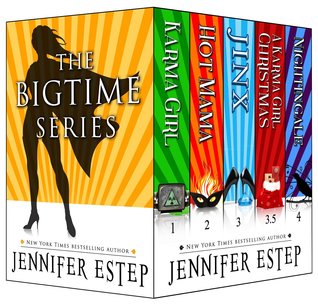 KARMA GIRL—BOOK ONE
After a surprising betrayal, investigative reporter Carmen Cole decides to devote her life to unmasking superheroes and ubervillains in Bigtime, N.Y. But her actions put her in the middle of a battle between the Fearless Five superhero team and the ubervillains of the Terrible Triad.

HOT MAMA—BOOK TWO
Fiona Fine is the hottest fashion designer in Bigtime—literally. That's because she moonlights as Fiera, a superhero with superstrength and volatile, fire-based powers. And with two new ubervillains in town, Fiona will need all of her powers just to survive.

JINX—BOOK THREE
Thanks to her unwanted superpower, fashion designer Bella Bulluci may be the luckiest woman in Bigtime. But luck can be good or bad, and it seems like just as many embarrassing things happen to Bella as do positive ones. But Bella is going to need every bit of her good luck when she becomes the target of two ubervillains intent on stealing a prize sapphire.

A KARMA GIRL CHRISTMAS—HOLIDAY STORY
On Christmas Eve, Carmen Cole is assigned to guard toys, clothes, food, and more that are intended for needy children and their families. An ubervillain plans to steal and then sell the toys to the highest bidder, but Carmen is determined to stop the villain—and make sure that this Christmas is a happy one for all the kids who are counting on her.

NIGHTINGALE—BOOK FOUR
Anxious brides. Drunken businessmen. Panicked partygoers. As Bigtime’s premiere event planner, Abby Appleby is capable of handling almost any crisis, but even she’s not prepared when she finds herself in the middle of a fight between superhero Talon and his ubervillain nemesis Bandit.

KARMA GIRL – 4/5
Cute chick lit PNR à la superhero where every city has at least one do-gooder, and one ubervillain. The characters were wacky, the story light-hearted, and no thinking cap was required to figure out the plot. I put most of the pieces together well before Jennifer Estep laid everything out, however it wasn’t overly difficult considering the first letter of each hero’s secret identity was the same as their masked self. The author was a little too liberal with her definition of karma, but she consistently went over-the-top in all of the aspects of this book, so it matched the overall theme, and made for an entertaining read.

HOT MAMA – 4/5
This installment was the complete opposite of the previous one; Carmen Cole was a reluctant heroine while as Fiona Fine was an “I’m the shit”, and fabulous, and powerful, and *insert endless glowing adjectives here*. This novel was even more off-the-wall than book 1 with boundless puns, crazy antics, and an irresistible second shot at love romance. I’d expected that Fiera’s large-than-life personality would get on my nerves, however given her back story; I couldn’t help but like her in the end. The twists were once again easy to predict as was the outcome, nevertheless fun was had by all.

JINX – 3/5
I had my doubts as to how a protagonist who hates superheroes was going to fit into this series, and unfortunately Bella’s wishy-washy ways drove me absolutely bonkers. It was easy to understand the reasons behind Bulluci’s unwillingness to give Debonair and their relationship a chance, but she burned so hot & and cold that her constant mood swings gave me whiplash. I enjoyed reading about her powers, and watching them go haywire was definitely good for a laugh, however the comedic relief wasn’t enough to save this book from its negative Nellie heroine.

A KARMA GIRL CHRISTMAS – 3.5/5
This short was a play on the classic GRINCH tale with two D-list ubervillains stealing all of the toys that were slated to go to underprivileged children during the holidays in an attempt to boost their infamy. Their evil plans get foiled by Karma Girl & Lulu, all of Bigtime’s superheroes chip in to help get the gifts back to Oodles o’ Stuff before the big event, Christmas cheer is restored, and Sam makes it home in the nick of time to drink eggnog with his wife. It was your typical, cheesy, holiday novella; I wish there’d been a touch more romance, but otherwise it was darling.

NIGHTINGALE – 4.5/5
Abby Appleby was one of the more enjoyable female leads in this boxed set which is weird coming from me considering that her negative monologue was similar to Bella’s, whom I did not care for—at all. I think I connected with her more because of her type-A personality, and I liked that both her, and the Talon’s identities were a mystery to each other. Also, she’s just such a giving character, always putting others’ needs before her own, that it was impossible not to root for Abby’s HEA. I do so love an underdog, and these two protagonists fit that description to a T. My fave installment of the series!

12 responses to “Review: The Bigtime Series by Jennifer Estep”