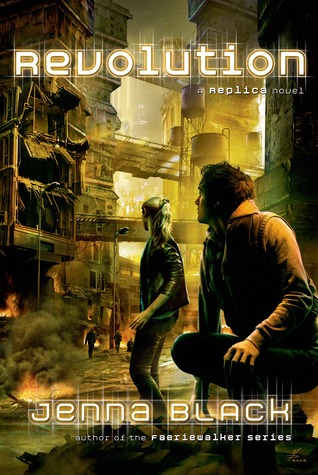 From the author of the Faeriewalker series comes the stunning conclusion to the young adult science fiction thriller series that began with Replica and continued in Resistance.

At the conclusion of Resistance, Nadia Lake and the Replica of her best friend, Nate Hayes, found themselves at the center of a horrifying conspiracy. Framed for murder and wanted by the government, they have no choice but to go underground and seek refuge in the dangerous, gang-ridden slums of the Basement.

Jenna Black brings readers an action-packed final installment that will have them racing to the finish.

I was so excited to get to the final book in the Replica Trilogy. I thought it was a great wrap up to the series. Revolution picks up right where Resistance ends with the group hiding from the government.

Nathan is the son of the chairman or government leader. He was murdered and brought back to life in book one. He is a cloned body with most of his memories in tact. He has never been a very good heir to his father. He shows no interest in doing anything government related Nadia is his betrothed. Her family has always been high up in government as well. While Nadia and Nathan were never romantically attracted to each other, they have been best friends.

Bishop is a former male prostitute from the Basement who helps hide the two fugitives. He is considered the low of the low in the class level of society. He is also Nathan’s lover. Dante is an “employee”. He is a servant to the “executive” class, but is working to topple the current power structure. Agnes is the daughter of a chairman of a different state. She was brought in as possible marriage replacement for Nate. She has been groomed to run, but is described as very common to look at and very shy and awkward around others. They are quite the misfit group of kids set to save Paxco.

The story does start off a bit slow in that Nadia, Nate and the gang are hiding out in the Basement. The government is accusing Nate and Nadia of murder. Since they can’t leave the apartment, there isn’t much action going on. They are able get stories about what is happening in the Basement and news reports of what lies the government is spreading. There is also character growth during this time.

There comes a time in the story where things between the Basement and the government hit a critical mass. There are riots and things look like they couldn’t get any worse for our main characters. Dorothy, the current government ruler, takes things further than the kids could ever imagine. The amount of violence that Dorothy rains down on people in her own territory is larger than anyone could’ve expected. There are several people who are killed or critically injured.

There is a new character in Shrimp. He is the younger brother of the gang leader in the Basement who helps to hide the misfit group of fugitives. While his brother is pretty cutthroat, Shrimp is a smart guy, but he is very loyal to his brother. He sees that his brother isn’t making the best decision, but has a hard time going against family. He also takes a great liking to Agnes. It was great to see her finally getting some attention.

I felt that this story wrapped up very well. It isn’t all hearts and rainbows and there are sacrifices made by some characters. But I thought it wrapped the story up the best way possible. I thought this was a great fast pace series. I’m not a big reader of YA, but I felt that this series was a great read. I thought that the overall story across three books was very interesting. The characters are well developed and make you really care about them and where they go.