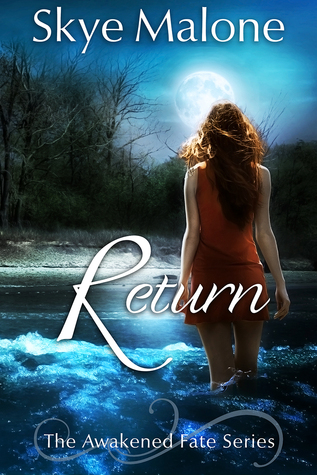 For Chloe, the ocean was supposed to mean safety and for a time, it almost did. She overcame the Sylphaen's drugs. She discovered an unforeseen attraction to Zeke, one that he shares for her. A life underwater seemed possible, until she learned that nothing was as it appeared.

After an unspeakable betrayal shattered everything she thought she knew about Zeke's world, she and Zeke have fled the ocean for the one place Chloe never expected to want to go.

But the challenge of living as a mermaid over a thousand miles from the ocean isn’t the only problem facing her. Home has changed. Enemies are waiting, ones she never saw coming. Her little Kansas town is full of surprises.

Including Noah, the guy she left behind.

This is the third in this series about a girl who discovers that she is half Deharian, otherwise known as a kind of mermaid person. She was kept away from the ocean by her adopted parents, who are part of a group called Landwalkers. Landwalkders were once Deharian, but are now unable to go anywhere near the ocean. After sneaking away from home to join her best friend Baylie at the ocean for a vacation, things change drastically in her life.

Chloe is a teenager, and has gone through a lot in all three of these books. She has been befriended by Zeke, also a Deharian, and has gone to his home under the ocean. Once there she was caught up in all the politics and intrigue of this realm, and comes close to being killed-more than once. When this book begins, she and Zeke are back on land and fleeing from both the Deharian’s that want her dead, and the Greliaran’s who are a race that was engineered to kill Deharian’s. To make things even more interesting, her other friend, Noah, Baylie’s step brother, has now been revealed as a Greliaran. Not good news when Noah and Chloe kind of have a thing for each other. And now Zeke and Chloe kind of have a thing as well. So yes, it’s a love triangle. But then this is young adult, and that seems to be the thing to do in YA books.

This time the story is told from three points of view, Chloe, Zeke and Noah-but not in the first person. I like all three of these characters, but have jumped back and forth on which of the two young men is my favorite. For their part, they both love Chloe, and Chloe jumps back and forth almost as much as I did between the two. Pretty big odds against her surviving a relationship with Noah due to what he and his family are. There’s a slew of bad guys, as well as a mad scientist. Not surprisingly, I am not a fan of Chloe’s adoptive parents either.

The last book took place mostly in the ocean, and this one takes place completely on land again. For some reason, I have enjoyed the time on land in these books, better than the under sea times. Maybe because I have such a hard time trying to picture people talking, or doing whatever else under water. I know, it’s fantasy and all that. But still.

There’s already a fourth book out featuring these characters, and a novella featuring another one of the Daharian’s, and I have already bought both of them. I am not sure how many books are in this series, but I will be reading them as soon as possible because of all the good characters, the intrigue both below the ocean and on land, the different premise involving the Daharian’s and the Landwalkers, and with this book, the discovery of a force that could take out mankind if it’s not stopped. And that doesn’t even delve into which guy gets the girl!

Recommended for young adults and adults that enjoy a good fantasy, one with action, violence, mystery, and a bit of a romance at times.