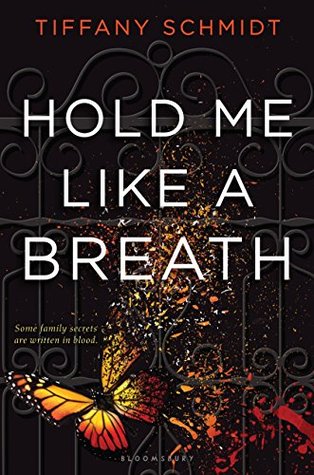 Hold Me Like a Breath by Tiffany Schmidt
Series: Once Upon a Crime Family #1
Published by Bloomsbury USA Childrens
Published on: May 19 2015
Genres: Young Adult
Pages: 400
Format: eARC
Source: NetGalley

In Penelope Landlow's world, almost anything can be bought or sold. She's the daughter of one of the three crime families controlling the black market for organ transplants. Because of an autoimmune disorder that causes her to bruise easily, Penny is considered too "delicate" to handle the family business, or even to step foot outside their estate.

All Penelope has ever wanted is independence-until she's suddenly thrust into the dangerous world all alone, forced to stay one step ahead of her family's enemies. As she struggles to survive the power plays of rival crime families, she learns dreams come with casualties, betrayal hurts worse than bruises, and there's nothing she won't risk for the people she loves.

Perfect for fans of Holly Black and Kimberly Derting, this first book in the stunning new Once Upon a Crime Family series from acclaimed author Tiffany Schmidt will leave readers breathless.

The first thing that struck me about this book was the title: HOLD ME LIKE A BREATH.

There are a lot of different ways you can hold someone, and I’ve heard innumerable similes in that regard, but never that one . . . “like a breath.”

You hold your breath like it’s yours, like it belongs to you, b/c it does. And whether you’re holding your breath b/c you’re underwater or b/c smelly things or for any other reason, you’re fighting yourself, b/c your natural inclination is to breathe.

Unsurprisingly, the title is appropriate, and for more reasons than I expected.

I’m really not sure what to do with this book . . . It’s been called YA fantasy and a retelling of a fairy tale, and if the author herself hadn’t referred to it as such in her note at the end of the book, I’d have thought it was another marketing misfire: grasping at straws and tangential connections to make the book appealing to a broader demographic.

However, regardless of Schmidt’s intent, only the flimsiest connections keep this story from being a standard YA contemporary romance, or maybe a romantic suspense. Even with the references to Once Upon a Mattress, which I’ve seen performed and very much enjoyed, it completely escaped me that HOLD ME LIKE A BREATH was supposed to be a retelling of The Princess and the Pea.

About two-thirds of the way in I finally caved and skimmed a few early reviews, one of which clued me in . . .

In hindsight, I can see it . . . a little bit . . . b/c Penny Landlow (our heroine) has an autoimmune disease, and at its nastiest, laying on a (dried or frozen) pea could literally leave a bruise. It also helps that as far as fairy tales go, THE PRINCESS AND THE PEA is pretty lame vague.

There’s nothing fantastical about having an autoimmune disease, and the singular aspect in which this world diverges from reality has to do with illegal organ transplants and the mafia-style families that govern them (also not fantastical), and that, in my humble opinion does not a “fantasy” make.

In fact, there’s almost an entire subgenre of contemporary romance that fixates on Bad Boy mafia men, and there are no more aspirations of being shelved as fantasy with them then there are in the love-me-I’m-famous (movie/rock star) category. At best I’d call this a modern retelling à la Baz Luhrman’s Romeo + Juliet. But that’s not a fair comparison either, b/c Baz Luhrman’s ROMEO + JULIET is the best modern retelling EVER.

And this . . . well, the story was fairly predictable. There was only one key plot point that I didn’t guess in advance (but even there I half guessed it), and some of the betrayals felt a bit OTT, as did the almost horror movie vibe b/c Bad Guy won’t die. I also like a bit less tragedy and a bit more hope in my YA reads . . .

There’s a reason I don’t read romances in which one of the characters is a ghost, and that reason is that a HEA is impossible. Plus it’s just painful to watch. It’s similarly painful to watch Penny b/c she’s so damn breakable. Admittedly, this scenario is slightly different, b/c she’s sick, not dead, and there was a definite hint of a cure if she’s brave enough to risk it, but this being YA, it probably won’t happen until the very last second of the very last book, so be prepared for that.

HOLD ME LIKE A BREATH by Tiffany Schmidt is less fairy tale retelling, more YA romance. If I had known that going into it, I probably would have enjoyed it more. That being said, taken as what it is, it’s not bad. A sheltered heroine who is determined to stand on her own two feet and a frog-turned-prince kept me entertained, and unlike me, you can read it with more realistic expectations. Recommended if you enjoy YA romance and the “family” life.

18 responses to “Review: Hold Me Like a Breath by Tiffany Schmidt”