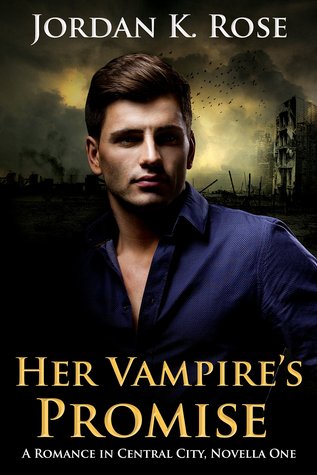 Reade Hayes knows better than any vampire that nothing good ever comes out of Central City. So he isn’t surprised the beautiful blonde he meets in a dive bar is crazy. What does surprise him is how fast she moves, how hard she hits, and the fact she’s wearing a ring he last saw two decades ago on the hand of his dead friend.

Is it possible the little girl he swore a blood pact to protect didn’t die in the fire? If the beauty sitting beside him is that pretty little baby, where has she been for twenty years? And why is she so lethal?

On hindsight Lawrie Tyrone realizes drinking vampire blood might not have been the smartest decision. But scientists experiment and if she is going to prove her father was not a traitor, she has to take risks. So far she’s experienced no alarming side effects, well, none other than being able to recognize vampires walking among humans.

From the power he exudes to his gorgeous dark eyes everything about the man to her right screams danger. Every logical thought tells her to kill him. But something in his eyes stops her. Is he using his vampire powers to influence her, or is something else making her heart ache for him?

Can love thrive in the ruins of Central City?

I have been seeing this author’s books around for awhile but had never tried one until now. I know this novella is the first in a series, but I am not exactly sure if they are all novellas or not. I do know that after reading this one, that I would like to read the next one in the series someday.

Reade is a vampire that is part of a group referred to as The Guard. I am still a bit hazy on what The Guard actually does. However, twenty years previously they were stationed? at a laboratory complex called Panthera, where Reade had made a blood pact concerning the small child belonging to a scientist that is researching vampire’s blood. There’s reasons why for this which I won’t go into. After a fire kills the child’s father, the vampire group loses track of the child after they are told she has died. Reade has never believed this and has hunted for her ever since. This is the story of what happens when he finally finds her.

I was pleasantly surprised at how well written this novella was. The whole first part of the story involved time spent in a dive bar with the three main characters, Reade, Garrison-also a vampire and part of The Guard-and of course the all grown up child-Lawrie-named after her father, Lawrence. A first for me, when the reader first meets Lawrie you not only don’t like her, but you think she is a nut job. And of course there is a big reason for this as well. And yes that part does change. Reade is an all around nice guy, as long as you don’t care that he is a lethal vampire. Garrison is kind of the comic relief, but not exactly in a good way as I think too much of him would really get on your nerves. Put another way, I hope he doesn’t get his own book! We do eventually meet some other members of The Guard, most of which were lethal bad boys to say the least.

I did have a problem with this read beyond the insta-love that comes with the territory in a romantic novella. Just when you feel like you are really getting into the story, it’s over. I was still trying to turn the pages and that’s never a good thing for me when reading. I think one or two more chapters would have gone a long way towards making me appreciate this read more.

I would recommend this to PNR readers at least 15+ due to some sexual conversations and thoughts only, plus some language not appropriate for a younger audience.


I did want to mention one more thing- I’m not a fan of the cover. Covers shouldn’t matter when picking out a book, but they really do. It didn’t change how I rated this story however.

10 responses to “Review: Her Vampire’s Promise by Jordan K. Rose”