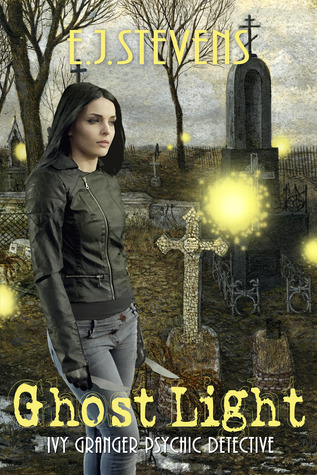 With a vengeful lamia that only she can see on the city streets, reports of specters walking Harborsmouth cemeteries, and an angry mob of faerie clients at her office door, it's bound to be a long night. Add in an offense against the faerie courts and a few foolish bargains and one thing is clear--Ivy Granger is in some seriously deep trouble.

Ivy Granger is back, gathering clues in the darkest shadows of downtown Harborsmouth. With the lives of multiple clients on the line, she's in a race against time. Ivy finally has a lead to the whereabouts of the one person who can help her control her wisp abilities, but will she put the needs of her clients above her own?

If Ivy doesn't find a solution soon, she could wind up a ghost herself.

Don’t you love it when you find a main character in a book that literally ‘makes’ the whole series for you? I found that In Ivy Granger, psychic detective and fairy princess. She is smart, brave, and strong willed, with a side of snark a mile long. I guess when you live in a city that is a natural habitat for the supernatural, you have to be all those things. Turns out that Harborsmouth sits where several ley lines intersect. Ley lines evidently attract the supernatural, so that explains why the city is crawling with fairies of all kinds, not to mention the vampires, and other various species of the paranormal sort. It’s become Ivy’s job to help the supernatural of the city with some of their problems. Usually Ivy touches an object and then has a vision to tell her what the client wants to know. This is the story of what happen when thirty three fairy children are stolen from their beds one night.

Ivy’s new found status as a wisp princess really comes into play in this book. As the daughter of Will-o’-the Wisp, king of the wisps, Ivy has more standing in the supernatural community than ever before. But first she has to go through with getting an introduction as a fairy princess to said community by way of the night club, Club Nexus. Club Nexus was one of the funnest part of the books. The author’s descriptions of what goes on the club, the politics, the different areas of the club that belongs to each fae group, all made Ivy, her boyfriend Ceff,(King of the Kelpies) and her human roommate Jinx’s visit interesting to say the least. Ivy goes there to try and find out why wisps lights have been seen near each of the kidnapping scenes. Since she knows very little of her heritage-due to a missing father-she needs help. Ivy has a new alliance in Torn, head of the cat sidhe’s. With his help, she hopes to find out where the children have been taken.

Ceff’s sea dragon, also known as a lamia, ex-wife shows up in this book as well. She really is a nightmare of a villain. In addition, all the characters from previous books are back. Kaye, the elderly, but strong witch, Hob, the kitchen brownie, and Marvin, the teenage troll, rounded out the characters nicely.

I thoroughly enjoyed this author’s vision of fairies, as I have in each book. Her descriptions are nothing short of amazing, and Ms. Steven’s imagination is off the charts at times. Now that Ivy is a respected member of the fairies, more and more have been added to the story. To keep them all straight, the author has included a glossary at the front of the book.

Romance? This book does have that. As someone that can’t touch another person without reliving their memories, she hasn’t been able to touch Ceff that much, because of all of Ceff’s very dark, and even horrific at times, memories. However, things are heating up in that story line, and I was a big cheerleader to that cause! I was very happy where the author took this part of the book.

This book has lots of violence, a good amount of action, and as mentioned before, a fantastic romance, one that I adored. There really is a lot to love about this book, and I did love it. I would recommend it to adult UF, or fantasy readers.