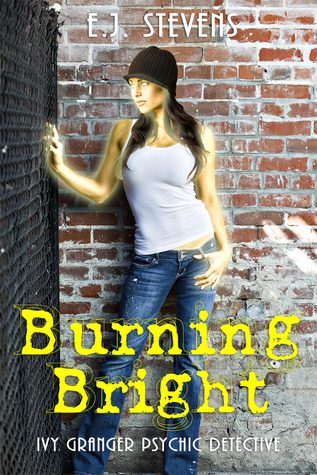 Burning down the house...

Things are not going well at the offices of Private Eye. Jinx is having demon problems, the city is overrun with pyromaniacal imps, and Ivy's wisp powers are burning out of control, attracting the attention of both the Seelie and Unseelie courts.

Along came a faerie queen... It's the worst possible time for the Green Lady to call in a favor, but Ivy's bound by her deal with the glaistig. Too bad there's no wiggle room in faerie bargains.

Ivy must rid the city of imps, keep Jinx from murdering her one solid link to Hell, and fulfill her bargain with the Green Lady--with sidhe assassins hot on her tail.

“Ever play whack-a-mole with a jinca? No? Well then aren’t you the fortunate one.” When I read the first couple of lines like that in a book, I know I am in for a good time while reading. This author has never disappointed me with any of her Ivy Granger books or her Hunting in Bruges book. She sucks me in and I usually read pretty non-stop when I can, because I totally enjoy this series about the supernaturally infused city of Harborsmouth.

Ivy Granger has the gift of being able to touch an object and know things about it-where it is, who has it, what it’s history is-that sort of thing. She’s been that way since childhood and had always wondered why she had to be so different, because although it’s a gift, it’s also a lifetime sentence of never being able to touch people or things without getting the whole history of the person or object, and usually she ends up in a very unwanted and painful vision. Recently she found out that she is a Fae princess and her missing father is Will-o-the-Wisp. Happily for Ivy, she now has a boyfriend, Ceff, king of the Kelpies. They are wonderful together, I must say.

This time around Ivy’s roommate and best friend Jinx, a human, has gone to Club Nexxus without Ivy, and has come home really sick. You can’t trust anyone at Club Nexxus due to it being a supernatural hangout, and Jinx is now the poster child of why human’s should never go there without a protector. This brings Kaye, the old witch, into the story again, as she is Jinx’s only hope to live. Kaye’s pupil, Arachne, has a much bigger role this time, and I enjoyed seeing her embrace her witchiness for a change. And if this problem isn’t enough for Ivy to solve, someone is starting fires all over Harborsmouth, and it’s up to Ivy to find out the why and the who, and of course it does have something to do with her-and Jinx.

As in all these books, the author features both the expected supernatural creatures-vampires,imps, demons, brownies, etc, and the unexpected-Jinca’s, sidhe’s, naguals,and glaistigs, just to name a few. The author certainly does have quite the imagination, even if they might? be based in mythology or supernatural history.

I came away from this book extremely happy with it. Ivy’s romance with Ceff, all the creatures, the mystery, the ridiculous situations that Ivy finds herself in, and the wonderful characters, and even a crazy trip to the Otherworld(not under)all contribute to a good read for adult urban fantasy fans. Highly recommended!