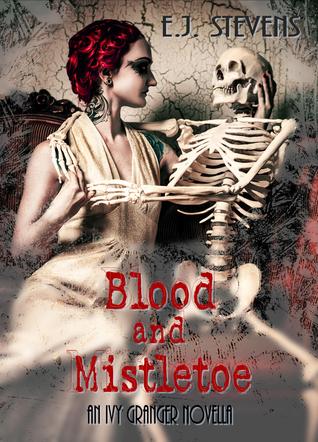 Holidays are worse than a full moon for making people crazy. In Harborsmouth, where many of the residents are undead vampires or monstrous fae, the combination may prove deadly.

Ivy Granger, psychic private investigator, returns to the streets of Harborsmouth in this addition to the bestselling urban fantasy series.

Holidays are Hell, a point driven home when a certain demon attorney returns with information regarding a series of bloody murders. Five Harborsmouth residents have been killed and every victim has one thing in common--they are fae. Whoever is killing faeries must be stopped, but they only leave one clue behind--a piece of mistletoe floating in a pool of the victim's blood.

The holidays just got interesting. Too bad this case may drive Ivy mad before the New Year. Heck, she'll be lucky to survive Christmas.

No, this is not a Christmas story-well not exactly. It takes place during the holidays, but the blood and mistletoe are things that are found at murder scenes in this story and actually don’t pretain to Christmas-other then the obvious. Because the victims are Fae, Ivy Granger, private detective (and newly realized Fae princess) is called in on the case.

The first book in this series, Shadow Sight, was an excellent introduction into the supernatural scene in the city of Harborsmouth, and also into Ivy Granger’s strange life. As in the first read, Ivy is brought into this case by the demon, Forneus. Forneus is still crushing on Ivy’s roommate Jinx, and Jinx is still having none of it. The smell of brimstone can be pretty off putting on a date after all. Although Ivy isn’t hurting for cases since she pretty much saved the town in the first book, she takes this one on due to the possibility of the mass murder of a lot of Fae.

All my favorite characters from the first book are back, in addition to Ivy, there’s Jinx, a human who also works at Private Eye, Kaye, the old and very powerful witch friend of Ivy’s, Marvin the sweet teenage troll, and last but not least, Hob, Kaye’s feisty kitchen brownie. Ivy is able to find things by touching an object, and also sees visions at times-making her a good detective. She is still dating the Kelpie King, Ceff, although in this story he is away for most of the novella.

Since this is a novella, I am not going to go into the story points that much. It’s a mystery, but it also expands on the story of this hub of supernatural activity, Harborsmouth, and more about the fascinating character of Ivy and her world. So far for me, the characters are my favorite part of the these reads, along with all the different paranormal characters the author introduces.

I know a lot of readers are not fans of novellas for a series. I, on the other hand, enjoy a short read occasionally, especially when the characters are so fun, as in this series. And sometimes, there is important information needed for future books, as in this one. At least I thought it was important. Ceff does know what to buy a girl like Ivy for Christmas-and that was important to the rest of the series.

I had a fun time reading this, and would recommend it to older young adults to adult. That’s due to some violence and gore, mainly. Fantastic read!

18 responses to “Review: Blood and Mistletoe by E.J. Stevens”