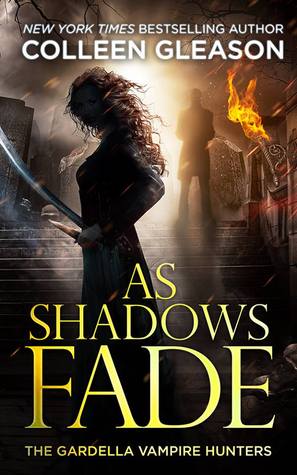 "Vampires have met their match with Victoria Gardella,"* but now the huntress faces an even greater evil as London is besieged by malevolent entities no mortal was ever meant to encounter...

Directly descended from the very first vampire hunter in the Gardella family, Victoria knows she must continue the lineage so humanity will have protectors against the undead. While Sebastian Vioget appears to both the perfect warrior and lover to ensure the Gardella Legacy, Victoria cannot forget Max Pesaro--the former slayer still haunted by the vampire queen Lilith's obsession with him.

But it is Lilith's obsession that may save all of humanity. Demons, enemies of both mortals and the undead, have found their way to earth. To defeat them, vampires and slayers must fight side by side. But Lilith wants Max in return for her cooperation--a small price for the world, but too high a price for Victoria.

A lovely ending to a wonderful series? A heartbreaking ending to a favorite series? A wonderfully written ending to a series I couldn’t stop reading? Another 5 stars for this exciting thriller of a read? All true.

A little background for those that do not know about this series. Victoria is a venator, otherwise known as a vampire hunter/killer. What makes this read different from all other vampire slayer reads is first of all, it takes place in Regency era England, and secondly, the world building is so inventive and wonderfully imagined by the author that it leaves other books of this ilk in the dust. And of course there is a third-characters that fairly leap off the page in their realness and complexity.

In addition to Victoria, other characters include Max, Victoria’s venator partner, mentor, and at this point so much more, Sebastian, Victoria’s ex-lover and most of the time friend, also a venator, Wayren, the mentor for all the venators and a mystery figure to all, and of course Victoria’s clueless mother and her two best friends- and partners in all things designed to get Victoria married to a member of the ton. Then there is Lilith, Max obsessed, queen of the vampires, and enemy to Max and to any kind of life Max wants with Victoria. She was pretty perfect throughout this series as a horrendous villain. Of course there have been other villains along the way, but she has been the worse.

I am not going to go into the story more because at this point it should remain somewhat of a mystery until you start the read, but of course you can always read the blurb. Although I don’t think I have read any of the blurbs of these books since the first one, because it’s not necessary when a series is so good that I didn’t care what it says.

It’s hard to say goodbye to characters that one has come to love and admire, and to a story line that was exciting, adventuresome, violent at times, and yes even romantic. This particular installment is still urban fantasy, but in the end there was an off the charts wonderful and sensual romance, making this book not only UF, but paranormal romance as well. By my standards that makes it pretty perfect.

So if you enjoy urban fantasy, and paranormal romance, I would highly recommend you read this series. You won’t regret it for one minute. It’s adult, due to violence and sexual situations-and don’t let the historical part scare you off-it only adds another dimension to this wonderfully written series. I have already bought the short story, Max Stops the Presses, that takes place after this book, and winds up a dangling thread for the reader. The author has also jumped a hundred years into the future and started another series that takes place in this world called, Roaring Midnight, and yes it takes place in the 1920’s. Can’t wait to read that one!

FYI This was originally published in 2009.

27 responses to “Review: As Shadows Fade by Colleen Gleason”