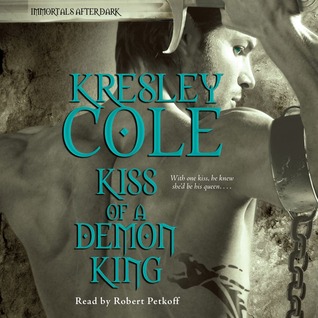 Sabine, Sorceress of Illusions: the evil beauty who surrenders her body, but not her heart.

Rydstrom Woede: the ruthless warrior who vows to keep her at all costs.

THEY WERE NEVER SUPPOSED TO WANT EACH OTHER THIS MUCH...

With each smoldering encounter, their shared hunger only increases. If they can defeat the sinister enemy that stands between them, will Sabine make the ultimate sacrifice for her demon? Or will the proud king lay down his crown and arms to save his sorceress?

The arch nemesis match-up was a cool idea, and I liked that Kresley Cole jumped straight away into Rydstrom’s story after Cadeon’s because Woede’s about-face towards the end of book 6 left me dying to know the cause. This installment was probably one of the hottest thus far, but that actually worked against KISS OF A DEMON KING; the couple felt as though they were an island unto themselves instead of part of the Lore, and the quest for the crown was downgraded to a minor concern. This novel was second to last for me in the IMMORTALS AFTER DARK series.

I don’t do well with plots that revolve around one setting, and granted this tale had more than that; however the bulk of the events unfolded either in Sabine’s dungeon, or Rydstrom’s demon camp, and it grew stale after a while. And, not just because of the limited scope, but also due to the monotony of the action. Sex is inherently redundant as is torture—cut, thrust, repeat—so after a couple of chapters of this, déjà vu set in. It also isolated the characters from the rest of the IAD universe, and as a result this audio felt disconnected from the whole.

Villains can be as captivating as protagonists, so Sabine’s evilness wasn’t the trait that turned me off from her plight. I liked that she stayed true to her course, and that finding love didn’t change her basic nature. Rothkalina never denied that she was a liar, a thief, and a master manipulator, but when the gloves came off there was nothing extra beneath the surface. Her sole redeeming quality was her devotion to her sister, Lanthe, otherwise there was absolutely no depth to her personage. She was just an empty shell of discontent.

I’ve been admiring Rydstrom from afar for several installments now, and was looking forward to seeing the Demon King in all of his raging glory. Imagine my disappointment when he spent the majority of this audiobook chained to a bed! He was all bark, and no bite; the only place that his furor came through was in Robert Petkoff’s narration which hasn’t wavered in its awesomeness since IAD #1. This was the second so-so volume that was much improved by his performance, and I’m grateful for his steadfastness at times like this when Cole’s writing slips.

11 responses to “Audiobook Review: Kiss of a Demon King by Kresley Cole”