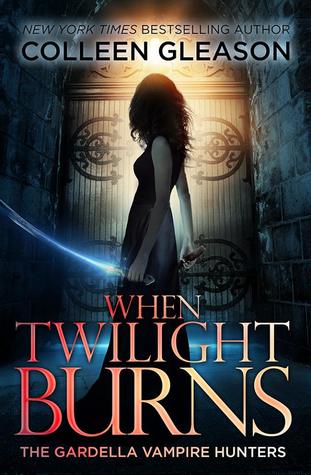 After narrowly escaping from Rome, Lady Victoria Gardella returns to London, where not even sunrise can stop a vampire's carnage...

Ruining Victoria's homecoming, a vampire stalks the streets of London--during the daylight. Not only is Victoria unable to detect the vampire with her heightened senses, but she's being framed as the prime suspect behind the killings.

Meanwhile, her heart is still divided between the enigmatic Sebastian Vioget and her fellow slayer Max Pesaro. The battle is made even more difficult by the legacy of a vampire's touch--a vampire who left in Victoria's veins boiling blood that forces her fight evil on two fronts: against the new breed of undead threatening London...and against the darkness within herself.

Burned out by all the vampire romances out there? I can pretty much guarantee that this series will draw you right back into the vampire world, and keep you reading until you finish them all. This is the fourth in the series, and this series hasn’t let me down yet!

Victoria is a member of the ton, otherwise known as the high society of 1822 England. She is also known in vampire circles as the ‘Summa Gardella’ due to being the last of the Gardella’s bloodline. It’s a bloodline that means it’s her duty to be the leader of the Venators, a group whose mission is to kill vampires. When this series started, she was a debutante, and just learning about her heritage. It’s all very hush, hush, and she can not even tell her mother. She wears a talisman that makes her stronger then most humans, but still has to train often.

So by day, she’s being called upon by members of the ton, evenings are mostly spent at balls, dinners, and other frivolities. But it’s night that finds Victoria roaming the streets of whatever city she happens to be in, sometimes by carriage, sometimes on foot, hunting evil vampires in their quest for blood. Don’t get me wrong, she also manages to kill more than her share of vampires at some of the events she attends, and it makes for quite the story and adventure.

There are two men in Victoria’s life. Max is a venator-one of the few not of the bloodline but one that won the title after many trials. He is enigmatic and fiercely loyal to the venators. Recently, he lost his venator powers and is not taking it well. Sebastian is the great (many greats)grandson of one of the strongest vampires, Beauregard. He is charming, good looking, and Victoria has spent a few pretty sensual moments with him in the past. Even so, Max has been my favorite throughout the series up to this point.

So much has happened to this trio thoughout all of these books. I really don’t want to tell specifics, but things are always changing in Victoria’s life. Her mother and her two friends are still trying to calm Victoria down so that she can find another husband from the members of the ton. She, of course, knows she can never again marry someone that doesn’t know her secrets, but she also is aware that she must have a child to carry on the bloodline. Her mother’s two friends are also the cause of much needed levity during parts of the story.

This installment fulfilled one of my wishes for Victoria, and that just added to my enjoyment of this read. Lilith the vampire queen is back, and causing all sorts of havoc in the characters life-as is her usual. This book is a bit darker then the others, although the last one had it’s fair share of darkness as well. There’s plenty of tromping around in the bowels of London, lots of staking of vampires, and of course it has it’s moments of gore to the extreme. This one features the coronation of King George IV, and the author had fun with involving Victoria, and her cohorts in that event.

I could ramble on and on, but I won’t. Suffice it to say, if you love vampire books, love a good urban fantasy, with a side of romance and don’t care what the time period is, I feel certain you will love this read, as I do.

26 responses to “Review: When Twilight Burns by Colleen Gleason”