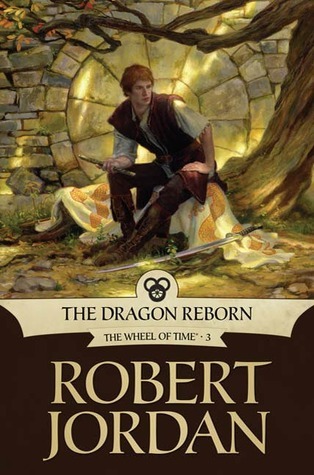 The Dragon Reborn--the leader long prophesied who will save the world, but in the saving destroy it; the savior who will run mad and kill all those dearest to him--is on the run from his destiny.

Able to touch the One Power, but unable to control it, and with no one to teach him how--for no man has done it in three thousand years--Rand al'Thor knows only that he must face the Dark One. But how?

Winter has stopped the war-almost-yet men are dying, calling out for the Dragon. But where is he?

Perrin Aybara is in pursuit with Moiraine Sedai, her Warder Lan, and the Loial the Ogier. Bedeviled by dreams, Perrin is grappling with another deadly problem--how is her to escape the loss of his own humanity.

Egwene, Elayne and Nynaeve are approaching Tar Valon, where Mat will be healed--if he lives until they arrive. But who will tell the Amyrlin their news--that the Black Ajah, long thought only a hideous rumor, is all too real? They cannot know that in Tar Valon far worse awaits...

Ahead, for all of them, in the Heart of the Stone, lies the next great test of the Dragon reborn...

The Dragon Reborn is where things really start getting good.

PLEASE NOTE that I am speaking strictly from the REREAD perspective. If you have never read the series before, the first two books are spectacular. Spectacular x5, even. It’s only knowing what’s coming and being impatient to get to the even better parts that makes books 1 and 2 merely enjoyable when compared to the depth of imagination and interconnectedness as the series progresses.

BUT. All of that epicness must have a solid foundation on which to build.

And book #3 is still very much a part of that early foundation-laying process.

However, TWO very important things happen in this installment:

1. Mat is healed from the taint of the Shadar Logoth dagger.
2. Perrin meets Faile.

I don’t know if prior-to-book 3-Mat was part of Jordan’s character growth process, or if he just got bored with the character—I certainly found the early version to be tiresome—but when Mat wakes from being Healed in Tar Valon, he’s almost a completely different person.

Oh, he’s still a rascal, but no longer a rascal of the juvenile variety. Instead, he becomes that kind of clever, scalawag, rogue-type character, who has always been one of my personal favorites.

In another life (HA!), he would have made an excellent pirate.

It’s the difference between telling a couple of younger boys a story about ghost hounds, then covering a few dogs in flour and loosing them on the village green, and betting Galad and Gawyn that he can beat them, his quarterstaff against their two swords, both b/c he needs the money to finance his escape, and also b/c “it would be fun.”

A lot of WoT fans aren’t particularly fond of Faile, and maybe I’ll change my mind after rereading some of the later installments . . . but I doubt it.

Firstly, she’s Saldaean, which is my second favorite people group (after the Aiel).

Secondly, almost all of the drama in her relationship with Perrin can be attributed to her nationality, and where others are simply exhausted by her and her antics, I chalk it up to cultural differences<------legit cause for misunderstandings. And when she's not behaving in what a non-Saldaean would consider a ridiculous manner, her interactions with Perrin are positively delightful; I am full of delight. Her appearance is also the first concrete manifestation (with long-term consequences) of one of Min's Viewings. So yeah, those two things are where I turn the corner and stop fighting the urge to skim things I've read numerous times before.

This book is also where the Forsaken start to become real instead of flat boogiemen-type characters.

In The Eye of the World, we learned nothing beyond the fact that some of them were no longer imprisoned, and that there were two fewer of them in world. In The Great Hunt, the information was limited to Lanfear. But in The Dragon Reborn, we not only learn more about Lanfear, we also meet at least three others, and some of the mystery surrounding “Ba’alzamon” is . . . not revealed, per se, but I definitely felt I understood what the situation was by the time I finished the book.

And anytime we learn anything about the Age of Legends (from whence the Forsaken came), I am a happy camper.

Basically, I loved it.

PS: is it just me, or does Cover Dude bear a remarkable resemblance to Prince Harry?

8 responses to “Review: The Dragon Reborn by Robert Jordan”