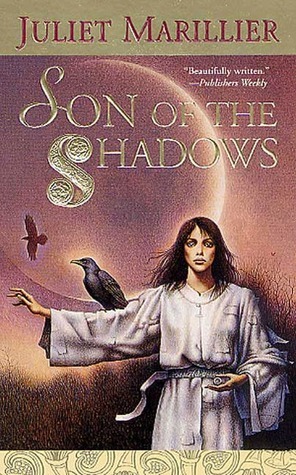 Second of the Sevenwaters trilogy of novels about the last days of heroic Ireland, Son of the Shadows takes up the story of the children of Sorcha, who saved her enchanted brothers, and Hugh, the Briton she married. Sorcha's daughter Liadan is a gifted seer and healer who thinks, in spite of her visions, that she knows what the future has in store for her--caring for her dying mother and then an alliance marriage to Eamonn. A chance meeting on the road carries her off to care for a dying man--one of the mercenaries of the sinister Painted Man, Eamonn's archenemy and a killer for hire. Liadan discovers that she cannot choose whom she loves and that she and the Painted Man are as bound up in destiny as her mother and father were before her.

Sometimes when I finish a book I know exactly what I think about it, and the review practically writes itself. Other times . . . I finish, thinking that overall I liked the book, but . . . something remains . . . unresolved. And the more I dwell on it, the more issues emerge, until the something evolves into multiple identifiable problems.

This is one of those times.

That’s not to say that Son of the Shadows wasn’t a good book. It absolutely was.

It just wasn’t a good book for me.

There are several reasons.

I didn’t particularly like either this generation from Sevenwaters or several of the other important new characters.

Sorcha and Red, the MCs from the previous installment, now have three grown children: their eighteen-year-old firstborn Niamh, and sixteen-year-old twins Sean and Liadan. Sean is the heir of Sevenwaters, Liadan has followed in her mother’s footsteps as a healer and is the “heart” of Sevenwaters, and Niamh is the petulant beauty with a nasty mean streak.

Does Niamh have understandable reasons for lashing out at others and placing most of her self-worth in her appearance?

I think the best kind of villain is the kind that you can empathize with, but still not like.

Villains you genuinely like aren’t villains. They’re anti-heroes. And villainous villains are fun to hate, but there is seldom much depth. Depth allows for empathy, which brings us back full circle.

But Niamh isn’t the villain.

Instead you’re left with a character you don’t like, and thus have a hard time drumming up sympathy for when she becomes a victim.

I recognized cerebrally that what happened to her was awful. But I didn’t feel it. Maybe if I had been able to, I would’ve been distracted from the why, which is what occupied my attention in place of the anguish I might have felt on behalf of a more likable character.

Niamh fell in love with an unsuitable young man. When it was discovered, the relationship was forbidden, but believing that her lover would never forsake her, she was completely shattered when he left.

“But why did he leave?” you ask, and that’s an excellent question.

It’s also a question the adults refuse to answer.

So later, when Niamh finds herself in abhorrent circumstances, she has nothing to fall back on. She sees herself as worthless, as unworthy of being loved—why else would Unsuitable Lover have abandoned her? Why else would her family have sent her away, turning their backs on her?

B/c you, the reader, know why the relationship is forbidden. I actually wondered if my wiring was faulty until my friend Robin (who BR-ed this me) said that she didn’t understand what the Big Deal was either. YES, what happened was unfortunate . . . worse than unfortunate. *whispers* Gross, man. But it was a mistake born out of innocence. And, I’m sorry, but that makes a massive difference to me. Robin, too, so there.

Maybe there are some kind of medieval social connotations we’re not aware of, or maybe we’re desensitized b/c current events. I don’t know. Doesn’t matter, really. What does matter is that I didn’t buy it.

Sean was MEH. I appreciated that he thought outside of the box, but he was too irrationally impulsive to like.

Liadan . . . my feelings in regards to Liadan are complex.

I should have liked her. I should have loved her. She’s exactly the kind of independent-thinking heroine that I usually admire and root unreservedly for.

And yet . . . I found her condescending.

My impression wasn’t that she questioned b/c she refused to agree to life-altering decisions without understanding the implications, but that she questioned b/c she-—in her infinite sixteen-year-old wisdom—-knew better. That she was correct didn’t matter to me, b/c I’m a brat, and if you do the right thing for the wrong reason . . . (and YES, I’m well aware of the irony).

And as with Niamh’s ignorance making a difference in my perception of her actions, Liadan’s motivations made what would have been admirable . . . less so.

Bran . . . is an ASS. And not the kind of ASS you find yourself liking against your better judgement, b/c not really an ASS. No, he’s the kind of ASS you futilely wanted to like you when you were in high school, despite that fact that he was an ASS, but looking back as an adult, you realize . . . what an ASS.

And just like High School ASS, Bran has reasons for being an ASS too. Another perfect villain in the making, but, once again, not the villain.

Which brings me to who was the villain . . . also an ASS, but unlike Bran, if he has reasons, they remain undisclosed.

My biggest issue also has to do with Villain, but be warned, it’s a spoiler:

View Spoiler »Liadan decides to head for Britain with Bran, leaving Villain not just free and loose, but her family ignorant of his treachery, practically insuring their betrayal at his hands at some point in the future, and SHE WON’T EVEN BE THERE b/c BRITAIN. « Hide Spoiler

However . . . lots of readers very much enjoy the kind of wounded-bear-type character Bran is, and forgive them everything b/c broken. That is not me. And my dislike of Liadan was based on an vague impression that I can’t support with evidence. When I was gearing up for the Buddy Read, several people told me that they loved this book even more than Daughter of the Forest. SO. Take what I’ve said with a grain of salt. You know your preferences. And you know how critical I can be. Even with my issues, Son of the Shadows wasn’t anything I’d consider a bad read, and it wasn’t until I started picking things apart that I lowered the rating from 4 stars. Also, I fully intend to read the next book.

13 responses to “Review: Son of the Shadows by Juliet Marillier”