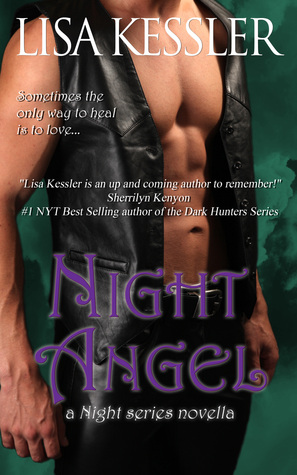 Sometimes the only way to heal is to love...

When Colin Flynn returns home to Ireland, the immortal Night Walker is not the protector he had once been. Although his flesh has healed, the scars hide a broken spirit.

Juliana Duffy is a survivor. She owns a florist shop and continues to play piano in spite of her deafness. Her prophetic dreams warn her of coming death and show her the faces of two men: one a customer and one a handsome stranger.

After hearing her music, Colin finds himself drawn to this woman who refuses to be defined by her injury. As an ancient enemy emerges and threatens her safety, Colin will need to learn Juliana's secret to overcome his wounds, and regain his strength.

But falling for a mortal could be the greatest risk of all...

From what I can tell, this novella was written due to fans asking for a specific character’s story and HEA. I thought that was pretty great that the author gave her fans what they had been wanting. Unfortunately, I still haven’t read all of the books, but it didn’t hurt the read for me at all.

Set in Ireland, this novella tells the story of Juliana, a deaf florist, and Colin, a Night Walker that has just returned home to Ireland. Night Walkers are not vampires, although they are immortal. They must drink blood to live, and they have an animal or bird that they shift to at will. Colin shifts to an eagle, although he was recently injured and part of his wing(arm)muscle is gone. He can no longer fly, and he is very depressed. He is informed that Benedict is back. Benedict is also immortal, and shape shifts to a sea horse of sorts-one that survives by eating women. Really fun guy to be around. Colin has made it his mission to stop Benedict for good, as he considers himself a protector of his part of the world.

Colin meets Juliana in a pub, after he sees her play the piano. He can’t believe that she plays even though she is deaf. He decides he wants to learn her secret of not being depressed by her deafness, and how she was able to rise above it. What he doesn’t know is that Benedict is also an admirer of Juliana, and has plans for her as well.

This was a sweet romance, but it was also a bit of a thriller. Benedict was a well written villain, and he has as big a part to play as Colin does in this read. Or pretty close anyway. I enjoyed the characters of Juliana and Colin a lot. Since it is a short read, of course the romance happens really fast, and since I usually don’t necessarily enjoy insta-love, I had to go with it. And that was fine in this case.

Lisa Kessler always writes good books that are romantic and paranormal-two of my favorite things in a read. The Night Walker series fulfills my love of both shifters and vampires-although each Night Walker stresses that he is NOT a vampire. Drinks blood to live-yep that describes a vampire, but since he shifts to an animal, well that makes for a different sort of creature altogether. I have enjoyed all of the books that I have read up to this point and recommend them to adult paranormal romance fans.