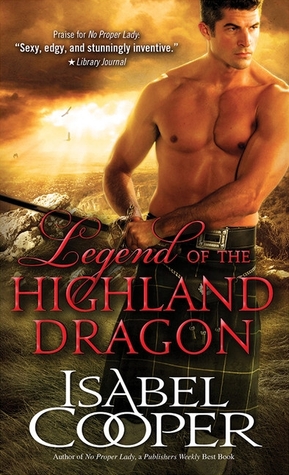 He Guards a Ferocious Secret

In Victorian England, gossip is often as precious as gold. But the Highlanders are a more mysterious bunch. And if anyone found out that Stephen MacAlasdair really was, he'd be hunted down, murdered, his clan wiped out. As he's called to London on business, he'll have to be extra vigilant—especially between sunset and the appearance of the first evening star.

Mina just wanted to find out more about the arrogant man who showed up in her employer's office. Some might say it was part of her job. She never thought the stranger would turn into a dragon right in front of her. Or that he'd then offer her an outrageous sum of money to serve as his personal secretary. Working together night and day to track a dangerous enemy, Mina comes to see a man in love is more powerful and determined than any dragon.

I never thought I would get into reading a book about dragon shifters, until I started this book. I bought it because I had agreed to review the third book in this series, and wasn’t sure if they were stand alone books or not. Turns out this book could stand alone, although the second one features a character from this one. Also, turns out that I liked it enough that I want to read the second one.

London at the end of the 1800’s is not exactly conductive to a young woman finding a good job. Mina grew up near the East End of London-which is pretty much the slums. Her family is poor but makes do, more then most. She is working for a professor scholar as a secretary when Lord Stephen MacAlasdair, walks in the door. She manages to get sucked into his, and the professor’s problems, one of which is deadly. Because she sees Stephen in his dragon form one night(while she is being attacked) and because of the dangerous problem he is trying to take care of, he can’t let her leave his house. Truly scandalous for that era. He offers her what amounts to four years salary to stay as his secretary, she just can’t leave because of the danger involved.

Mina was a good character. I wasn’t sure at the beginning that I would like her, because to be honest I first thought she was too nosy for her own good, and pretty brazen. Before the book was over, I was totally won over by her. Smart, capable, extremely brave, fiercely loyal, and ambitious for a better life, were all ways to describe her as the book went on. Stephen is a couple of centuries old, super handsome, truly dislikes being in London as his home is in Scotland, and he definitely has never met anyone like Mina in all those years. It’s not long before he is spending way more time with Mina then is necessary. Of course it helps that they are in the middle of trying to find a murderer-one that is out to kill Stephen, the professor, and the further the story goes, even Mina.

This story is full of mystery, demons, a horrible villain that uses equally horrible magic, and of course a romance. And as far as romances go, it was pretty great actually. I enjoy a slow burn romance a lot more then love at first sight, so this didn’t disappoint. While this wasn’t a bodice ripper, there is plenty of sexual chemistry, and there is a sweet(and actually fairly hot) scene of a sexual nature, so I would consider it an adult read. The pace fit the time period, not super fast, but with enough action that it kept me engaged throughout. I thought it was well written, and I completely enjoyed the whole thing.

24 responses to “Review: Legend of the Highland Dragon by Isabel Cooper”