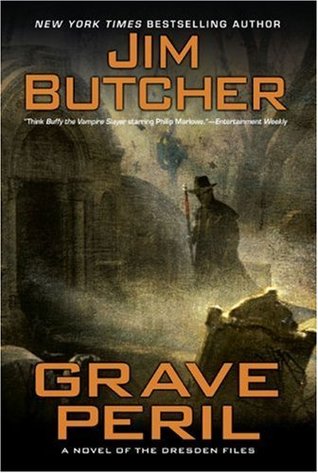 Harry Dresden’s faced some pretty terrifying foes during his career. Giant scorpions. Oversexed vampires. Psychotic werewolves. All par for the course for Chicago’s only professional wizard.

But in all of Harry’s years of supernatural sleuthing, he’s never faced anything like this: the spirit world’s gone postal. All over Chicago, ghosts are causing trouble—and not just of the door-slamming, ‘boo’- shouting variety. These ghosts are tormented, violent, and deadly.

Someone—or something—is stirring them up to wreak unearthly havoc. But why? And why do so many of the victims have ties to Harry? If Harry doesn’t figure it out soon, he could wind up a ghost himself....

GRAVE PERIL was a kind of awkward installment.

And that vaguely referenced takedown is the source of this book’s plot.

But we weren’t there for that takedown, so it feels like we’re missing something; that the “vague references” are vague b/c we already have the 411, and more detailed explanations aren’t necessary . . . -Even though I knew, I KNEW, that, no, I had not accidentally skipped an installment, I found myself constantly wanting to check and make sure (*whispers* again).

Beyond that I had a (gaping) handful of other small issues, beginning with the fact that I don’t like ghosts.

That’s part of why I’m not much for steampunk: the Victorian obsession with contacting the dead is often inseparable from the gadgetry. And the concept of malicious spirits that are strong enough to physically harm the living . . . is rather horrific. Mostly b/c I can’t get past the “dead” part. I mean, what do you do when your attacker can’t be killed or stopped. . . b/c ALREADY DEAD?! Like Harry himself says:

There should be some kind of rule against needing to kill anything more than once.

If there’s a Winchester handy, then well and good, but I don’t have a Sam or a Dean in my back pocket (mores the pity).

I’m not much for vampires either. Oh, there are versions that I like well enough, but in truth they’re merely at the top of the “Dead Things” list. And these vampires . . . if someone told me the colloquialism “bat shit crazy” had its origins in this series . . . I would believe them. Entirely.

Michael is the illusive true Man of God. Were he a real man, I would not be surprised if he “walked with God; and he was not, for God took him.” Like Enoch.

Which can be uncomfortable, but mostly it’s dull. And hard to like. Everything is very black and white to Michael, who is demonstrably disappointed in Harry for beating his Faerie Godmother at her own game (that would be manipulation of words and intent, aka tricking), when the alternative is to allow her to literally own him . . . By the end, he was easier to deal with, but I’m honestly not sure it that’s b/c he got toned down, or b/c I really liked his wife, which made me like him more by default.

It’s also starting to irritate me how little consistency there is to Harry’s abilities.

A pattern seems to be forming: x happens, leaving Harry practically powerless, then y happens, not only re-energizing him, but giving him a surplus of power as well. Furthermore, many of the times Harry’s been depleted, he somehow manages to “dig a little deeper” and accomplish the same kinds of things he’d be able to do were he not depleted. There’s always some searing pain that accompanies these feats, presumably to account for the power surge in the midst of weakness, but as Harry seems to recover from his injuries at a remarkable rate, it feels like smoke and mirrors. (<------HA!) I'm not saying Harry should never encounter obstacles that inhibit his ability to wizard. BUT. If it continues to happen in every, single book . . . *frowns* Lastly, Harry says, "Hell's bells," twenty-eight times. So I had a LOT of problems with this book. BUT . . . I still really enjoyed it. B/c no matter what plot point or character issues I had, I immensely enjoy Butcher's writing. When he's not being a gross boy (b/c GORE. Yes!)---do not ask, I refuse to relive it, but I will say this: if you’ve already read this book, the fork in the WTF? button should have special meaning—he’s created an immensely engaging character in Harry, and between his amazing feats of wizardry and, yes, his adorkableness, I find myself able to stamp down the less-than-thrilling aspects of his story.

Plus now there are also interesting plot developments and new characters to counter the mounting exasperation. Like Thomas. I friggin’ LOVE Thomas. Speaking of Thomas, this is an example of the excellent writing that holds me in thrall:

The first sound to ring out was neither gunshot nor battle cry, but rich, silvery laughter. It drifted up, masculine, somehow merry and mocking, bubbling and scornful all at once. I squinted down through the lights, to see Thomas, posed like some bizarre post-chrysalis incarnation of Errol Flynn, one foot up on the stairs, hand braced, his other hand on the crystalline hilt of his sword. His head was thrown back, every lean line of muscle on him displayed with the casual disregard of skilled effort.

Bob is also a consistent source of hilarity, AND there was a View Spoiler »DRAGON. « Hide Spoiler

So clearly it wasn’t all, or even mostly, bad, and with SUMMER KNIGHT, the almost universally acknowledged game changer up next, there’s no way I’m stopping now. I’ll keep you posted.