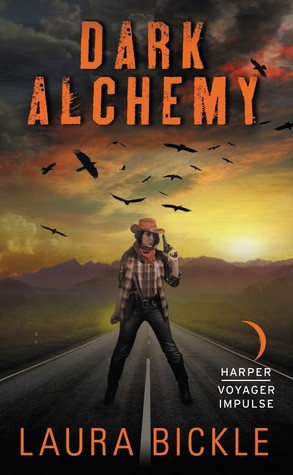 Geologist Petra Dee arrives in Wyoming looking for clues to her father's disappearance years before. What she finds instead is Temperance, a dying Western town with a gold rush past and a meth-infested present. But under the town's dust and quiet, an old power is shifting. When bodies start turning up - desiccated and twisted skeletons that Petra can't scientifically explain - her investigations land her in the middle of a covert war between the town's most powerful interests. Petra's father wasn't the only one searching for the alchemical secrets of Temperance, and those still looking are now ready to kill. Armed with nothing but shaky alliances, a pair of antique guns, and a relic she doesn't understand, the only thing Petra knows for sure is that she and her coyote sidekick are going to have to move fast, or die next.

Temperence, Wyoming is an odd place . . .

That’s odd as in seriously creepy, not odd as in . . . a little bit different.

There’s meth cooker called “The Alchemist,” not to be confused with Lascaris, the alchemist whose “discoveries” of gold were the foundation of the town back in the Gold Rush . . .

It’s strongly implied that the “discoveries” were alchemical successes that none have been able to replicate—not for lack of trying—in the 100s of years since Lascaris’ untimely death in a fire that destroyed all of his belongings and research materials . . .

That’s either highly convenient or highly inconvenient, depending on your perspective.

Enter Petra Dee, a geologist searching for her father who happened to disappear 20(ish) years ago, last seen in Temperence, where she’s just accepted a new job.

Would you believe that Papa Dee had an interest in alchemy as well?

Another strange coincidence would be the curiously familiar profile inside a mourning brooch Petra stumbles across in the town Pawn Shop/Historical Society to the tune of:

“Say . . . that looks like weird dude with the blood that glows who I watched get beat the hell up, but who had nary a scratch on him the very next day . . . ”

So the plot was interesting. But I had a few quibbles:

I picked this up b/c being set in the Midwest and having a bunch of crows on the cover, I figured there’s be a Native American angle, and there was, but alchemy was the bigger focus, which has never been a point of interest for me. YES, I know “alchemy” is in the title, but I was hoping there’d be more to it. There was . . . just not enough . . . for ME.

The Park Ranger is as overbearing as he’s supposed to be, but I’ve never understood the point of having faux love interests—if he’d been an old geezer, the role could have been filled just as well and without the awkwardness.

The message-from-beyond via Bobby Darin song was straight out of LOST.

Overall, better than meh, especially if you like the creepy side of Urban Fantasy. Dark Alchemy has creepy in spades (HA!). Between the aforementioned Alchemist who seems to ooze Mercury, the growing number of highly calcified and deformed almost corpses, and the ranch hands of the local BMOC who dangle underground from the roots of the “Hanging Tree” . . . Like I said . . . creeptastic.

Minus 0.5 stars for referring to a gun as a “toy.” <------not cool, not EVER. Was this review helpful to you? If so, please consider voting for it on Amazon or like it on Goodreads!