We all have our breaking points…that moment when we’re reading a steamy, uber-romantic scene and all of a sudden, BAM, we’re hit with way too much cheese. It might be something as simple as, “Baby, you light my fire.” To “My sweetest honey flower, you’re the most exquisite creature in existence. I can’t imagine living my life without you. I will die by the sword rather than let you go.” Yeah, you get the point, mega-barf.

As a writer, it’s hard to know just how much cheese to put in a scene. There needs to be some of course because we are talking about romance, but a balance is really important…and sometimes incredibly hard to reach. I can tell you that I struggled with finding the right amount of romance in my early writing for sure. In fact, I still get nailed at times for going a little bit too hard on the gushy stuff. It can be particularly tricky when you’re dealing with fated mates (which my Order of the Wolf series plays with). There’s an instant connection between hero and heroine and I’ve had to work hard to maintain a balance between that concept and reality.

My Huntresses are linked to two different men, one a Hunter and one a werewolf. She must choose which to claim for herself. Essentially she must choose what side of the battle she will commit to. Her decision is usually a lot about lust, that instant attraction at meeting someone that gets her motor revving, amplified by destiny, fate, magic. But lust isn’t really that romantic on it’s own so there needs to be some level of emotion at play, a reason to commit that involves the heart as well as the body. That means my heroes need to get a little mushy. They need to expose their hearts in some way. Making it believable is the trick.

I have a really low threshold for cheese in real life. I accept it, love it actually, in romance novels but I’d snicker and snort my way through most romantic scenes if they happened in real life the way they happen in fiction. 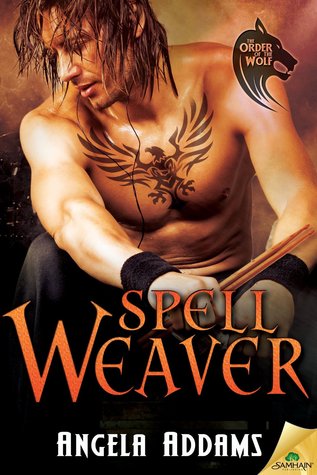 Shot by a Huntress, his wolf trapped within him, Dyami Storm is battling a poison that is eating him alive. His only hope is finding his mate, but without his wolf to guide him, he doesn’t know where to look.
The second the sexy bad boy stumbles into her tattoo shop, smelling of booze and oozing attitude, Summer Sinclair knows he’s trouble. She should turn him away, but a strange magnetic pull compels her to help him out with a little ink.

When Summer’s boyfriend walks through the door, Dyami senses he’s in the presence of a Hunter, and the Hunter recognizes him as a wolf. With hackles raised, a weapon coming at him, Dyami’s only choice snaps into place. Bite Summer, marking her as his—and unleashing her powers as a Spell Weaver.
On the run from Hunters and losing his fight against the poison, Dyami is in a race against time to convince Summer her power could change the course of the war…and that his fate is in her hands.


She lives in Ontario, Canada in an old, creaky house, with her husband and children.

Angie is giving away a signed copy of Wolves’ Bane, limited edition Order of the Wolf keychain and a signed Cursed bookmark! Giveaway is only open to Canadian and U.S. addresses. So what say you? Is it possible to have too much romance? Not enough?

Have you read anything lately that you found really romantic or really cheesy?

50 responses to “Question: Is It Possible To Have Too Much Romance (with Angela Addams)?”