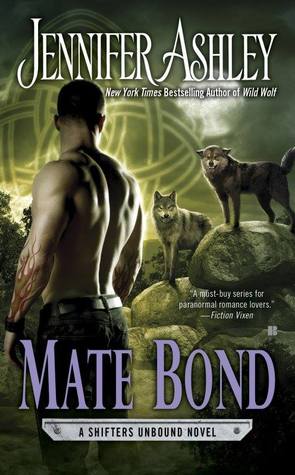 Together but unbound, they must learn what it means to love completely, in the latest novel from the New York Times bestselling author of Wild Wolf.

To cement the leadership of his North Carolina Shiftertown, Bowman O’Donnell agreed to a “mating of convenience.” Two powerful wolf shifters, he and Kenzie keep the pack in order and are adored by all. Bowman would do anything to protect Kenzie, for in each other’s arms they’ve found far more than friendship. But as strong as their attachment is, they still haven’t formed the elusive mate bond—the almost magical joining of true mates.

Now with a monster ravaging the countryside and threatening the Shiftertown community, some in the pack fear that a pair without a true mate bond isn’t strong enough to lead. Bowman and Kenzie will have to rely on their instinctive trust in one another to save their Shifters—and the ensuing battle will either destroy them or give them the chance to seize the love they’ve always craved.

Bowman & Kenzie’s relationship is near impossible to put into words; they got married to unite Shiftertown, but never formed a metaphysical connection even after fifteen years together, and a cub. The romance had a forbidden fruit / dead spark feel to it, however not because they can’t keep their hands off of each other, and live in constant fear of forming a link with someone else. Needless to say, it’s complicated, and that’s what made their story so gut-wrenchingly emotional. And, I haven’t even touched on the plot, action, or secondary characters yet! Yes lovelies, MATE BOND is in the running for my top werewolf read of 2015.

This was only my second encounter with Jennifer Ashley’s writing, and I was reminded once again why I NEED to one-click the rest of her SHIFTERS UNBOUND series ASAP. The world-building is top shelf, there’s an assortment of weres to fan-girl over—I’m partial to the wolves—and the dynamics between pack members, couples, and outsiders are exceptional. The author smoothly fuses humour, romance, and adrenaline while also going above and beyond in areas such as pop culture references, and mythology. I enjoyed the Guardian tidbits, and the DRESDEN FILES & IRON DRUID CHRONICLES hollas were just straight-up fun.

The protagonists are going to tie you up in knots with their crisis-of-the-heart, so brace yourselves for waterworks! Shifters place the mate bond above all things, and because Bowman & Kenzie have yet to form one, it’s expected that they call it quits if ever they find it with another. Both of them are tested in this book, and I was furiously cursing Ashley at certain points while mentally preparing myself for an ugly cry free-for-all. I loved the two leads, and how the author drove me into becoming wholeheartedly invested in the final outcome.

I liked how far reaching the story was from Ryan’s challenges as the son of an alpha, to Cristian’s problems with no longer being head honcho, and Gil Ramirez’s battle to find happiness. The villain’s depravity knew no bounds, just when I thought that his deviousness had reached its max, he pushed the envelope even further, and the last blow was godawful. Every minor thread was as all-consuming as the central plot was which made this novel seem as though it was superglued to my hands because I couldn’t pry it from my fingers.