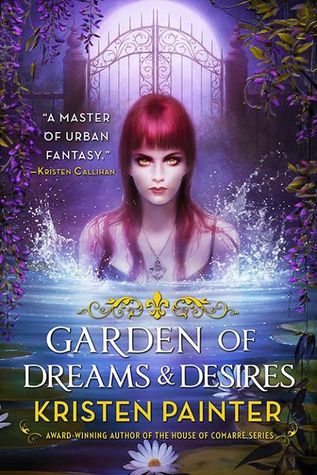 Magic is twisted and chaos reigns in this climactic final novel in the Crescent City trilogy by award-winning author Kristen Painter.

New Orleans is on the brink of war.

Harlow is a ghost in her own body. She has no control, no power -- all she can do is watch as her twin sister Ava Mae lives recklessly and foolishly, slowly destroying everything Harlow has worked so hard for.

Augustine needs to focus on his new role as Guardian of New Orleans, as tourists mysteriously disappear off the streets, but all he can think of is rescuing Harlow -- Keeping his family safe.

As the Coven grows more powerful, control of the city hangs in the balance and if the witches prevail, no fae will survive.

I don’t know if it was the writing, Kristen Painter’s personal style, the characters, or what, but I’ve come to the conclusion that this trilogy just wasn’t my thing. CITY OF ETERNAL NIGHT showed the most promise out of all of the books (except for the ending); however this finale felt more like the author was going down a checklist than delivering Harlow & Augustine’s story in all its messy glory. Boy gets the girl: Check. Deal with the senator: Check. Usurp the prime: Check. Exorcise evil twin: Check. It was all business, and not enough Urban Fantasy.

GARDENS OF DREAMS AND DESIRES was a busy novel that could have easily been split up into two installments, and probably should have been. There were too many threads that needed to be settled, and too few pages to do it in which in turn forced Painter to get down to brass tacks, and to cut back on some of the aspects that first drew me to this series such as her geeky plugs, and Fae mischief. I found no info on the author’s website with regards to being dropped by her publisher, so I have to assume that this is the tale she intended to tell.

Harlow was starting to mature as a character, only to have her evil twin sister hijack her body in the last chapters of the previous book which by the way is a spoiler; however it’s mentioned in the blurb, so I saw no reason to tiptoe around it. I was still pissed at the heroine for making such a amateurish mistake in COEN, and wasn’t thrilled about her being eighty-sixed by Ava Mae. That was only the case until the 36% mark, but writing the lead female protagonist out of CRESCENT CITY’s conclusion was just bad form in my opinion.

There were several elements that were left up in the air, and others that were far too cleanly resolved. Is Olivia forever stuck on the Fae plane that’s home to the Claustrum? Giselle’s been dealt with, but what about Ian? Lally’s true purpose is now known by many, shouldn’t there be consequences, or at the very least questions raised? Harlow & Augustine’s HEA was rather mediocre, and elicited a that’s it? reaction from me as opposed to the fulfilled happy feeling that readers have come to expect from a final installment in a trilogy.

GARDENS OF DREAMS AND DESIRES was in all probability a case of it’s not you, it’s me; however if not, blargh sums it up nicely.

17 responses to “Review: Garden of Dreams and Desires by Kristen Painter”