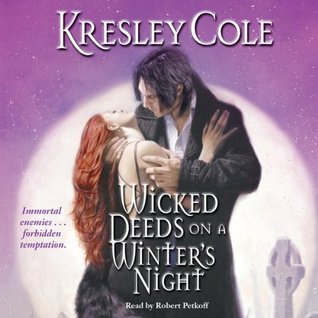 Her breathless kiss haunts him...

Bowen MacRieve of the Lykae clan was nearly destroyed when he lost the one woman meant for him. The ruthless warrior grew even colder, never taking another to his bed -- until a smoldering encounter with his enemy, Mariketa the Awaited, reawakens his darkest desires. When sinister forces unite against her, the Highlander finds himself using all his strength and skill to keep her alive.

His slow, hot touch is irresistible...

Temporarily stripped of her powers, Mari is forced to take refuge with her sworn adversary. It's rumored that no one can tempt Bowen's hardened heart, but soon passion burns between them. Though a future together is impossible, she fears he has no intention of letting her go.

No deed is too wicked for her seduction...

If they defeat the evil that surrounds them, can Mari deny Bowen when he demands her body and soul -- or will she risk everything for her fierce protector?

Until this installment I didn’t realize that many of the plots in this series run parallel to each other, so when I found myself back in the midst of the Hie I was ecstatic. It was interesting finding out what happened to Bowen after Sebastian trapped him, and learning more about the witch who cursed him. The two protagonists played a wonderfully devious game of cat and mouse throughout WICKED DEEDS ON A WINTER’S NIGHT which made their dialogue hysterically funny, and their lovemaking mercurial, especially when MacRieve accidentally screamed his ex’s name. I had a blast listening to this title; Kresley Cole & Robert Petkoff are a powerhouse of audiobook wizardry!

Thus far, we’ve become versed in the intricate Lore surrounding this author’s Valkyries, vampires, and werewolves, so you’d be right to infer that my expectations vis-à-vis her witches were through the roof. Mariketa’s also part fey which means that Cole had heaps of awesome new material to work with, and rest assured that none of it was wasted. I loved discovering the powers related to the five casts, exploring the specifics surrounding the Awaited’s prophecy, and the captromancer powers were just plain cool (and creepy!). Other than a bit of glamour, and a couple of secondary characters, the fey elements were negligible which I’m assuming was intentional, and will be explored in a future installment.

I liked how dissimilar the two protagonists were; Mari is only twenty-two years old, hasn’t been frozen into her immortality yet, and is the embodiment of a modern young woman. In comparison, Bowen is ancient, has already found & lost his mate, and is prejudiced towards witches. Also, their relationship really got off on the wrong foot what with Mariketa cursing the werewolf, and MacRieve entombing her with crazed incubi. Watching these two attempt to bridge the gap was an exercise in futility, but when they finally give in to their baser instincts their chemistry was as clear as day. The twist at the end was exquisite, and I adored how it all came together.

With only three IMMORTALS AFTER DARK installments under my belt, and still ten left to go (plus novellas), I risk repeating myself with regards to Robert Petkoff’s narration; however for the time being I’ve no shortage of positive adjectives to use when it comes to his delivery of this series. His sinfully dreamy Scottish accent was back for a second lap, and in addition to it he unleashed Bowen’s beast with a guttural werewolf voice that succeeded in doing naughty things to my insides. I’m sure that Petkoff captured Mari’s character beautifully as well, but for some strange reason all I can remember is MacRieve. RAWR!

WICKED DEEDS ON A WINTER’S NIGHT’s title is self-explanatory or in other words… hot, hot, HOT!

18 responses to “Audiobook Review: Wicked Deeds on a Winter’s Night by Kresley Cole”