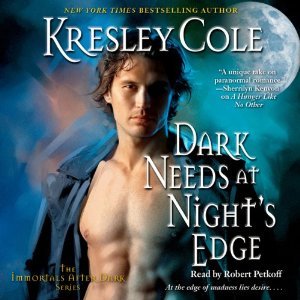 Bestselling author Kresley Cole continues her seductive Immortals After Dark series with this tale of a vampire shunned even by his own kind and a beautiful phantom, bound together by a passion they cannot resist.

A RAVEN-HAIRED TEMPTRESS OF THE DARK...

Néomi Laress, a famous ballerina from a past century, became a phantom the night she was murdered. Imbued with otherworldly powers but invisible to the living, she haunts her beloved home, scaring away trespassers -- until she encounters a ruthless immortal even more terrifying than Néomi herself.

A VAMPIRE WARRIOR CONSUMED BY MADNESS...

To prevent him from harming others, Conrad Wroth's brothers imprison him in an abandoned manor. But there, a female only he can see seems determined to drive him further into madness. The exquisite creature torments him with desire, leaving his body racked with lust and his soul torn as he finds himself coveting her for his own.

HOW FAR WILL HE GO TO CLAIM HER?

Yet even if Conrad can win Néomi, evil still surrounds her. Once he returns to the brutality of his past to protect her, will he succumb to the dark needs seething inside him?

Spooks have their place in paranormal fiction such as hauntings, or sidekicks, my difficulty with them lies in their feasibility as happily-ever-after candidates. There are really only two possible scenarios in this type of situation, and that is for either the deceased half of the couple to be revived by magical means, or for the living partner to join their beloved in the beyond. Option two is kind of a downer, so authors tend to ostracize it in favour of the former which essentially means that a character will be brought back to life thus breaking one of my top three hard no-no rules. Again, this is an individual preference.

Docking an audiobook two stars for the above seems pretty harsh which is why my quibbles with DARK NEEDS AT A NIGHT’S EDGE do not end there. Initially I liked Conrad’s character; he was edgy, on the cusp of madness, and cutthroat to the extreme. Néomi for her part didn’t make much of an impression on me; she was moody, superficial, and rather boring to be honest. Their relationship was comprised of numerous long winded discussions, stop-and-starts, and overall they just lacked chemistry. I enjoyed the other two Wroth brothers, Bowen, Cadeon & Rydstrom’s brief cameos, and as usual the Soothsayer bits were a slam dunk.

I thanked my lucky stars that Robert Petkoff’s narration was there to see my through book 4 because without him I would have been in real danger of giving up on this installment. His transition from present to past tense as he followed Conrad’s progression from insanity to lucidity was a stroke of genius in both its delivery, and Cole’s writing technique. Petkoff stayed true to the French language with his accent, and pronunciations while also conveying Néomi’s coquettish femininity which demonstrated great range considering his aptitude with the bestial alpha males of this series.

My issues with DARK NEEDS AT A NIGHT’S EDGE were wholly my own, so what was only an average listen for me could be, and is an extraordinary addition to the IMMORTALS AFTER DARK franchise for the masses.