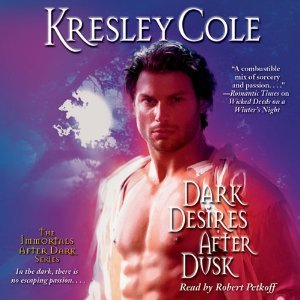 A seductive beauty he can never have. Yet can't resist...
Cadeon Woede will stop at nothing to atone for the one wrong that will haunt him forever. But once he secures the key to his redemption, the halfling Holly Ashwin, Cade finds that the woman he thought we could use for his own ends and then forget haunts him as much as his past.

A tormented warrior she should fear, but can't deny...
Raised as a human, Holly never knew that some frightening legends are real until she encounters a brutal demon who inexplicably guards her like a treasure. Thrust into a sensual new world of myth and power, with him as her protector, she begins to crave the demon's wicked touch.

Surrender to dark desires...
Yet just when he earns Holly's trust, will Cade be forced to betray the only woman who can state his wildest needs--and claim his heart?

After three superb installments, this series hit a bit of a snag with book 4, but I wasn’t going to hold that against Kresley Cole or Robert Petkoff, and I’m glad I didn’t because DARK DESIRES AFTER DUSK was glorious! One of the things that I love most about IMMORTALS AFTER DARK is that you meet some of the protagonists beforehand because on top of giving you something to look forward to, it also helps to get readers invested in each character’s eventual outcome.

Holly wasn’t the first heroine whom I’ve encountered that’s been afflicted with OCD, however she was by far the most likable. Ashwin has lead a very PG life as a result of her condition which in turn is the reason why her transformation to Valkyrie was unusually delayed. Intense emotions and warriors are practically synonymous, so when a group of immortals attempt to kidnap her, it frees her combatant side. I think Cade’s attitude in relation to Holly’s disorder went a long way towards endearing her to me because he not only understood her limitations, but respected them, and that sensitized me to her plight instead of making it into a baffling annoyance.

As fetching as some of the female leads have been, let’s face it, I listen to this series for the men (and Petkoff’s narration, but I’ll get to that), and Cadeon Woede was delectable. I liked that he wanted to do right by his brother, and to a lesser degree, his mate. His loyalties were first, and foremost to Rydstrom, although that didn’t stop him from teaching Holly how to fight. Nix’s behind the scenes meddling continues to amuse, and with all of this talk of vessels, the Ascension, and the demons going to war, it’s not unreasonable to assume that I’ll be in the loop on all things IAD when #14 comes out because this series just keeps getting better!

You can tell that Robert Petkoff recorded the first ten novels in close proximity to one another by his ever increasing proficiency with Cole’s characters and writing. He was fully immersed in this universe for quite some time while bringing the audiobook versions of this series up to speed, and that fact comes through in his delivery, accents, and fervor. I enjoyed his rendition of the rage demon aspects of Cade’s personality, and applaud his commitment to the steamier parts of these stories.

DARK DESIRES AFTER DUSK put the MMMmmm in demons.