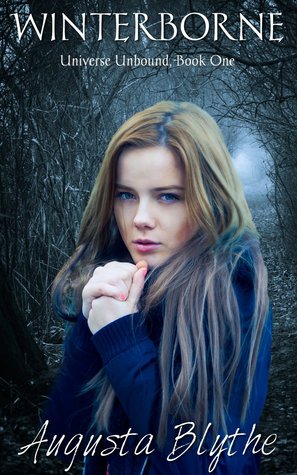 Mia Winterborne knows she is destined to be special. Her upcoming seventeenth birthday promises more than just a driver’s license. Details are sketchy, though, as her dad disappeared with all the answers when she was five. By Mia’s side is Loie Bryce, her best friend and eternal sidekick extraordinaire. The girls’ intense friendship has never wavered until now, when Andreas arrives in Salcey Ridge. They both fall hard for the hot Brit, who quickly becomes a fixture in their lives. When they discover that Andreas is not who he appears to be, the frightening reality of Mia’s abilities finally hits home. The nearer Mia’s birthday draws, the more the danger escalates and long-buried lies are exposed, putting the girls on a path that they never expected.

If someone had told me a few years ago that I would be reading and enjoying YA books, I would have probably laughed. Not so now. There are so many good ones to pick from nowadays, and my latest is this one, Winterborne, first published in 2011. I received it from Net Galley in exchange for a fair and honest review.

Loie is a teenage girl, growing up in a small town with Mia, as her best friend. She lives in a small apartment with her chain smoking, bitter grandmother. Mia is as beautiful as Loie is smart. She’s also popular with the boys, perfect, rich, and Loie is the planet, to the sun that is Mia. And she loves Loie dearly. When Andreas, a gorgeous new boy in town, befriends them both, the girls, for the first time, compete for the same boy. In the midst of this, the girls are planning their seventeenth birthday party-both having being born on the same day. The two girls are also celebrating that Mia will be coming into her “powers” due to a story told to her by her mom. Since her powers are inherited from her missing father, she has no idea what they could be, and to make it even more interesting, her mother doesn’t believe one word of it. What they also don’t know, is that there are lots of different evil creatures that are never going to let Mia reach her seventeenth year, or die trying.

It was interesting that the main character is the best friend, instead of the beautiful gifted girl, and that was unexpected, and I thought pretty unique. As the girl that always gets the short end of the stick in life, Loie is pretty much content with her lot in life as Mia’s friend. She knows her own life has been stifled in favor of Mia’s, but because of her own horrible home life, her life with Mia, and Mia’s mom, Georgia, is the best thing she has in her life. That is until Andreas turns both of their lives upside down. He’s everything both girls have ever wanted, and he is also not what he seems at all.

When creatures start escaping from their secret world, into this small town, and attempt to hurt Mia, the story really ramps up. This author’s rich world building features evil pixies, terrifying garden gnome like, leprechauns, huge, frightening devil dogs, and more. We learn who the good guys are and about where they live, and so much more, in this story. A big question is, who is Andreas really, and is he part of the bad creatures world? Also, what really happened the night Loie’s parents died, and Mia’s father went missing? So yes, in addition to being a paranormal story, it’s also a romance, and a mystery.

I loved all the characters, that is except for the evil creatures, of course. I enjoyed the premise, the use of Loie as the main character, and the twists and turns the story took. There are some surprises to be had here, even if the reader does gradually figure some things out.

It’s very telling that as soon as I finished this book, I immediately started(and finished)the second book, titled, Ravenstoke. That’s how much I enjoyed this read. I highly recommend this to young adults from about age 14 plus, through adult.

By the way, I never thought that I would ever read a book with evil leprechauns, but it totally worked-even though I did have a moment of levity, when they first entered the story.