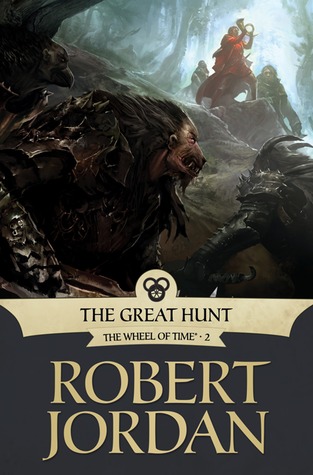 The Wheel of Time turns and Ages come and pass. What was, what will be, and what is, may yet fall under the Shadow. For centuries, gleemen have told of The Great Hunt of the Horn. Now the Horn itself is found: the Horn of Valere long thought only legend, the Horn which will raise the dead heroes of the ages.

And it is stolen.

For whatever reason, this is the installment that’s held up the least well for me. Not b/c it’s not awesome—it absolutely is—but b/c even MORE awesomeness is IMMINENT.

And I know it (b/c fiendish rereader).

SO. We have a Dragon Reborn and a Wolfbrother, but what’s behind door #3? *raises hand* b/c I know, I know! *sighs*

The Great Hunt is a concept that can be found in numerous mythologies, but not surprisingly, my favorite versions have always been the ones with Fae roots (which rhymes with Beirut, which is who I’ve been listening to on repeat for the last few days, b/c consistent. Fyi).

If you’re unfamiliar, it’s fairly simple: if the moon is particularly bright, and you hear a horn sounding in the distance, DO NOT LEAVE THE SAFETY OF YOUR HOME. B/c Fae on horses-that-don’t-get-tired with hounds-that-have-super-senses (and may or may not have been human at some point), are out and about, hunting “big game” and NO GOOD can come of you getting caught up in that shit.

Jordan’s version is pretty nifty too.

The Horn of Valere, prophecied to be found (just?) before the Last Battle, will call the greatest heroes who have ever lived to fight on behalf of the horn-sounder . . . whatever their intent may be . . .

YES, you read that correctly. The greatest heroes of legend will be compelled to fight for either good or evil, depending on who gets their grubby lips on it first.

Which is kind of impressive if you think about it—a hunt for a brass instrument vs. a hunt for human prey?

BUT. If I’m being honest, there are a couple of legitimate reasons that I didn’t like this installment quite as much as the last one. You know, beyond being impatient for my favorite character to stop being an adolescent idiot.

One of Forsaken, Lanfear has been used as a boogieman to scare children into behaving (a concept that I find horrific, incidentally . . . Does anyone actually do that? Tell their children that some super scary monster-person will get them while their sleeping, if they don’t do as they’re told? I sincerely hope not . . . ). Anyway, this early in the series, the Forsaken are mostly feared for nebulous follower-of-the-Dark-One reasons.

However . . . we do learn a few things about Lanfear:

And she wants him back.

Does not care that the Dragon Reborn is a completely different, maybe 20 years old model, when she herself probably had a couple of centuries under her belt before she was sealed inside the Dark One’s prison for several thousand years.

If that wasn’t obnoxious enough—and trust me, it is—she still hasn’t figured out that it was her obsession with power and acquiring ALL OF IT that drove Lews Therin away the first time.

So we get to watch her numerous failed attempts to entice Dragon Reborn into seeking glory for himself.

I mean, really . . . how can she claim to love him, yet willfully know nothing about him?

Then there are the Seanchan . . . The Seanchan freak me the hell out.

Besides practicing numerous and varied types of slavery, which shows a terrifying lack of regard for human life . . . These people aren’t just ethnocentric, they’re an entire population brainwashed into wholeheartedly believing in the superiority of specific types of people and the inferiority of others . . . o.O

Right. So in addition to that, they’ve tamed monsters (like grolm: bear-sized, three-eyed beasts with grayish green, lizard-like, impossible to penetrate with things like swords or arrows, hide, and sharp, hooked beak-like mouths) to the point of riding them like horses.

And what do they wear when they ride their pet monsters?

Metal armor lacquered and segmented to look like an insect carapace . . . to better match the mandibles and feelers on their helmets . . .

I don’t know about you guys, but I can’t come up with a scarier image than a GIANT INSECT riding some kind of prehistoric-looking monster into battle. Oh, and the ground might just swallow you whole before you even get a chance to defend yourself, b/c wielders of the One Power? Yeah, they’re one of the MANY previously mentioned enslaved people groups.

Still a fantastic installment though. PLUS, *whispers* I may not have mentioned it, but WoT #3 brings ALL KINDS of awesome, so gird your loins, little fishy . . . and keep on swimmin’.

5 responses to “Review: The Great Hunt by Robert Jordan”