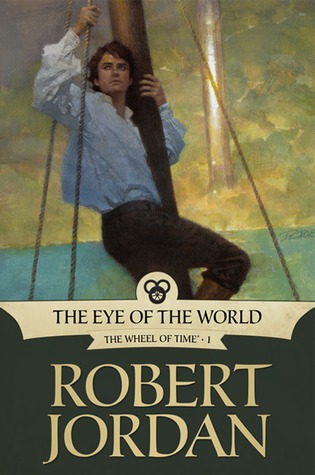 The Wheel of Time turns and Ages come and go, leaving memories that become legend. Legend fades to myth, and even myth is long forgotten when the Age that gave it birth returns again. In the Third Age, an Age of Prophecy, the World and Time themselves hang in the balance. What was, what will be, and what is, may yet fall under the Shadow.

It’s hard for me to review this book, and only this book, objectively, b/c:

The first time, I was nineteen. Ish. I read all of the available books, back-to-back, schoolwork be damned.

Then I read them again.

And I loved them even more the second time.

I thrive on detail, you see. And Robert Jordan was a master of details. I caught so many previously missed foreshadowings, clevernesses, nuances, etc. that had flown right over my head the first time.

Like when Thom, Mat, and Rand jumped aboard Bayle Domon’s ship, and Thom spun a tale for the captain, explaining how they happened to come upon his ship with Trollocs (nasty man-beast things) on their heels:

Now it just so happened that he had earlier learned the location of Aridhol from a map given him many years ago by a dying friend in Illian whose life he had once saved . . .

The whole series is FULL of things like that.

Rand al’Thor, Mat Cauthon, and Perrin Aybara are three young men on the cusp of adulthood. They live in Emond’s Field, where they have small village concerns and small village lives.

But when the previously mentioned Trollocs: attack their village, it forces them to accept that such creatures of the Dark One are not mere stories made up to scare children. And when the two strangers who arrived just prior to the attack turn out to be an Aes Sedai (wielder of the One Power) and her Warder (warrior/protector), the manboys learn that a small village life is not in the cards for them (HA!) and are forced to leave their homes to protect their families from the Great Lord of the Dark’s minions, who won’t stop until all three are in their master’s grasp.

Jordan does an excellent job of keeping you guessing: which manboy is the Dark One after and why? Is it really just the one, or is it all of them? If it is all of them, are they all equally important, or do the degrees vary? WHAT DOES IT ALL MEAN?!

B/c this is not a simple story.

And one thing we do know is that Rand, Perrin, and Mat are ta’veren, and as such they unwittingly pull others into their quest: a so-much-more-than-a-simple gleeman whose past regrets dictate his future actions, a young Ogier whose curiosity and wanderlust led him to leave his peaceful stedding home to see the things he’s spent his life reading about, Rand’s sweetheart who refuses to be left behind and longs to become an Aes Sedai herself, and the village Wisdom who feels compelled to both protect the young people from Aes Sedai machinations and also to break through the Warder’s walls.

Each and every one of them vital in their own way.

Also vital are the multitudes of seemingly random observations and commentary that in reality are the foundations of awesomeness to come.

And despite having read The Eye of the World so many times that I practically have it memorized, I have yet to grow immune to the very real and heartbreaking struggles that many of the characters face.

Whether it’s Rand’s terrible journey from his farm in the Westwood to Emond’s Field, dragging his injured father to safety, Loial’s treesong to preserve a small part of his Treebrother’s sanctuary in the Blight, or Nynaeve’s yearning for a man bound to a never-ending battle that he cannot win . . . I still feel it. *rubs fist over heart*

And if you are unaffected by Moiraine’s tale of the long fallen Manetheren:

“But some did not flee. First in a trickle, then a river, then a flood, men went, not to safety, but to join the army fighting for their land. Shepherds with bows, and farmers with pitchforks, and woodsmen with axes. Women went, too, shouldering what weapons they could find and marching side by side with their men. No one made that journey who did not know they would never return. But it was their land. It had been their fathers’, and it would be their children’s, and they went to pay the price for it. Not a step of ground was given up until it was soaked with blood.”

then you have only a black, shriveled thing in your chest cavity.

SO. As daunting as this series may be (and I will never deny that it is daunting) . . . if you are a lover of fantasy, and you haven’t read Robert Jordan’s Wheel of Time, you are doing yourself a major disservice. The Eye of the World has the best prologue I’ve ever read IN MY LIFE, so I challenge you to read it. It’s just a prologue. And if you don’t feel the need to see what happens next, then hey . . . all you’re out is the 15 minutes it took you to read it. ALSO, no one is holding a gun to your head. There’s no law that says once you start, you can’t stop until THE END. Take your time. Enjoy it. Or don’t. Whatever. But my recommendation is that you do.

These are the books that spawned my love of reading fantastical things as a adult.

ALSO, I’ll be keeping a spoiler-tagged record of the various bits of prophecy, Min’s viewings, etc. that accumulate along the way at the bottom of my Goodreads review. Fyi.

16 responses to “Review: The Eye of the World by Robert Jordan”